Why?  Well, for one thing, I hate heights.

And my kids were not going to get up on the ropes unless I proved they were safe by placing my own monstrous girth and weight upon them as a stress test.

I hate heights, if I was not clear about that earlier.

But I got up there, and by golly so did they.

Except for My Captain, who stayed below in case he needed to put humpty dumpty back together again.  And to take pictures.

Varmint is so brave. 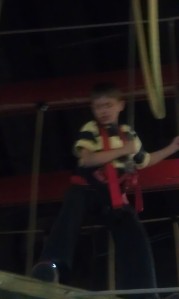 And fast.  Critter is fast and fearless. 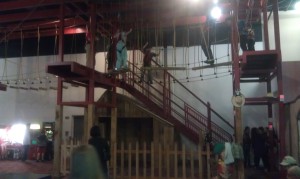 Except for Mama, who had a deathgrip on every solid piece of metal she could find…even though she was triple-tethered and double-harnessed and clinging desperately to any and every staff member she could find.

So I finished my Hot Dog, and then sat twiddling my thumbs for a bit.  Grandma Jane had come with us, and she was doing a crossword puzzle while she waited.  That was all well and good, but all I had to keep myself entertained with was My Captain’s phone, which he had given me to hold while he braved the 5K obstacle course.

Whenever I get My Captain’s phone (and it’s rare because he doesn’t trust me with it for some reason, which frankly is unchivalrous and also a sad comment on our marriage)  I like to screw with his settings.  Usually I just change his ring tones.  Once I made his ring tone the sound of a woman climaxing.  That’s when he stopped sharing the combination to unlock his phone with me.

But for some reason he hadn’t changed it since I last knew it…and so there I was with an hour on my hands and nothing to do but screw with my beloved’s phone.  I can’t tell you what I did with it because I want him to find out on his own.

I like to keep him on his toes in this relationship.  Don’t want him to get too comfortable.

ANYWAYS….after about an hour passed by, two hot dogs, two cups of coffee, a blue gatorade and a potty break, I wandered over to the finish line with the camera.  I wasn’t disappointed.

The end of the course was a rope climb and a final mud pit.  I really enjoyed watching the wild abandon it unleashed in people: 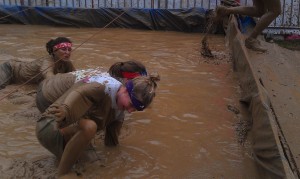 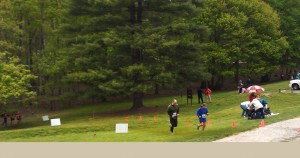 YEY!  There they are!  With My Varmint in the lead, no less!

Into the mudpit they went.  Well, into the mud pit My Captain went.  My Varmint was working smarter, not harder.

You can barely make them out, but there are many bungee ropes you are supposed to wiggle under.  My Varmint cheated and pulled them up or climbed over them.  All the spectators were chanting for her to dive in. 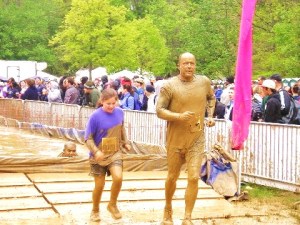 And as you can see, she mostly did!  Would you look at My Captain?!  Good LORD.  My washing machine weeps at the sight of this.

They got great exercise.

They spent time in the great outdoors.

They may have picked up some horrible dermatological fungus.

My Varmint and My Captain were nicely warmed up and stretched out for their 5K race/obstacle course called Run Amuck today.  It was time to get into the starting line (read: Mob).

There were a LOT of runners.  That means a lot of feet in the mud.  Ever seen a muddy path after thousands of feet went through it?  I was starting to wonder if my crew should have duct taped their shoes to their feet like so many other runners had.

It was ridiculous how many people there were.  They had several heats for the race…and all of these numbskulls were looking forward to the dirt and the rope climbing and the tiger pits.  It was remarkable.  But I have to admit, for a moment or two I seriously wondered about my fellow Americans.

The starting horn sounded and they were off.  My Captain is below the second T in the Start sign, in the scaffolding.  My camera sucks. 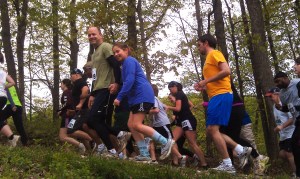 The very start of the race went up a steep embankment.  My crew was still smiling at this part….but more importantly, look at their hands.  They were helping each other from the start.

When Varmint suggested this race, she had no idea the bonding she would be supporting.  And if you don’t think I got a little teary-eyed when I saw this, you’re crazy.

It made me wish for a moment that I had signed up to do it too.  Then I remembered that I am averse to pain, and thought the better of it.  So I watched my beloveds run out of sight, and promptly found a hot dog vendor.  Watching a race can be so draining.

Today was the day!  My Captain and Varmint ran the 2012 Run Amuck Obstacle Course 5K!  It was fantastic.

The weather, not so much.

To keep her warm when she got wet, I put Varmint in my polypropylene shirt from kayaking, circa 1994. I couldn’t believe the shirt was still so effective.  Then again, it’s probably made of the same thing Twinkies are, so there you have it.

I’ll let the pictures tell the story for the most part, but I have to interject.

I can’t help myself. 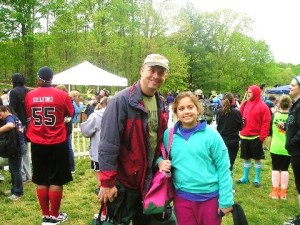 It started off chilly.  The contestants were layered.  Mama Boe looked like an Eskimo, and no pictures of her survived editing.

My baby girl was a little bit anxious before the race.  When she wasn’t looking, I could see the stress on her face.

But she went through with it, and I love her so much for that.

Before the starting horn, they got down to their polypropylene and Under Armour.  They were so psyched!

But I’m a little skeptical about the tiger pits.  I mean, come on, tiger pits are so passe.  But I wasn’t worried for my crew because they were surrounded by crack athletes at the top of their game.  I knew they would be in good hands:

So the pre-race stretching began: 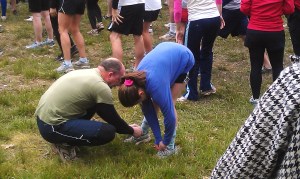 And the pre-race shoelace tying began.  Many people wrapped their shoes in Duct Tape so the mud on the course wouldn’t suck their shoes off.  My Captain merely tied the shoes TIGHTLY and it worked as well.

But it wasn’t as cool, I have to say. 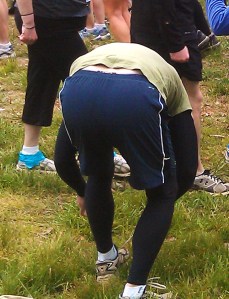 How did this picture get in here?  Oh yeah, I wanted to point out the light blue duct tape on that runner’s shoes.

More on the race to come!

My Captain is the quintessential pragmatist.  He is the king of efficiency.  He is always trying to find an easier way to get more accomplished.  He’s the guy that annoys the slackers in a group with his gun-ho-get-it-done personality.

Slackers hate guys like that.  It highlights the half-assed attitudes endemic to slackers.

If there is something that is done a certain way, and the reason it is still done that way is simply, “Because We’ve Always Done It That Way,” that isn’t good enough for My Captain.

If something works well-enough, but it could be better, he has to fix it.

If someone says, “Aw, it’s not my job,” it sends him into a frenzy.  He hates seeing a job poorly done.  And after he bickers with the person who does it poorly, he’ll more than likely just do it himself.

And he’ll do it in the most economical, efficient way possible.

He’s my super organized, incredibly logical, effectual-as-hell perfectionist.  I love that about him.

So when I see him coaching Varmint’s softball team’s pitchers, and practicing on their form with them, and I see him like this:

I know it’s not because he’s lazy.  No sirree.  Not MY Captain.

That’s his story, and he’s sticking to it.