Our little town has a special group dedicated to the promotion of civility.

It started about a decade ago when concerned folk wanted to squash negative behavior, like bullying, and just plain rudeness, and bring back politeness.  You know, reinforce kindness and charm and, heck, just put the true back in True Blue.   They dubbed this concept PRIDE, which stands for Purpose, Respect, Integrity, Dedication, and Effort.

The townfolk  wanted to bring to the forefront of our community’s consciousness the concept of pushing these ideals a little harder than those currently being pushed via social media, Hollywood, and Pop Culture.

This year, I went to a meeting of PRIDE.  And within a half an hour, I had signed myself on to be in charge of building the PRIDE float for our annual town day, otherwise known as Poolesville Day.

What would the float be???

Be the difference and lend someone a hand.

As in, be someone’s rescuer!  You never know how much your help might mean to someone!

So we decided the float would be a giant, extended “Let Me Help You” hand.  As if someone were reaching down to lift someone else up.  Think Sistine Chapel…

It’s a beautiful idea, isn’t it?  I thought of it myself.  Well, I thought of stealing DaVinci’s idea, anyway…   You might say I’m artsy fartsy in a totally plageristic sort of way.

But I’m most emphatically NOT artsy fartsy enough to actually BUILD such a concept. That was where the middle school art teacher, Mr. Gemmell, and his students at John Poole Middle School came into play.  In the space of a week, some chicken wire, some scrap wood, and some paper mache, and Bada Bing, Bada Boom, THE HAND was born.

And throughout this summer, we, and some student volunteers,

are going to finish the armature, and get the beauty painted.

Our good friends, The Stottlemyers, loaned us the trailer.

And our dear friends The Browns,

in conjunction with the beautiful town of Barnesville,

are loaning us the storage space and work space.

Reverend Ann, from our local Episcopal church, donated the funding.

And My Captain?  He got volunteered to be the structural engineer.  He’s SO PLEASED with me for signing him up!   You should have seen his face when I told him the news!  (ahEM.)

We (and by we, I mean THEY) got the claw, er, I mean, THE HAND loaded onto the Stottlemyer’s trailer, and immediately Varmint began to worry that it would fly off the trailer in transit. 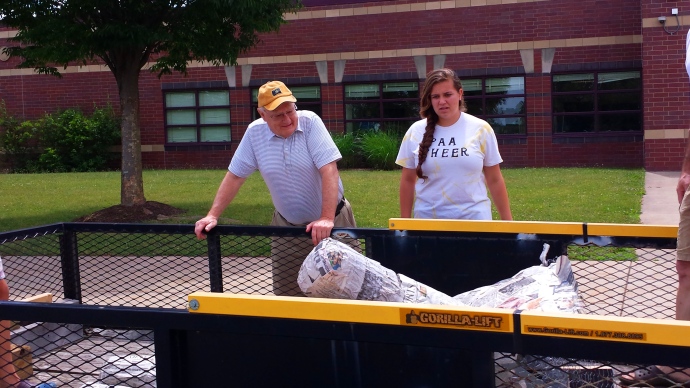 She had visions of a giant hand flying off the trailer and hitting a busload of children or something.  Or worse yet, the pizza delivery guy.  She was seeing mayhem, I tell you!

Varmint, Critter, Mike, and Grandma Jane had little faith in my assessment.

As did, I’m happy to say, My Captain, who has been around the block a time or two with my over-zealous optimism. 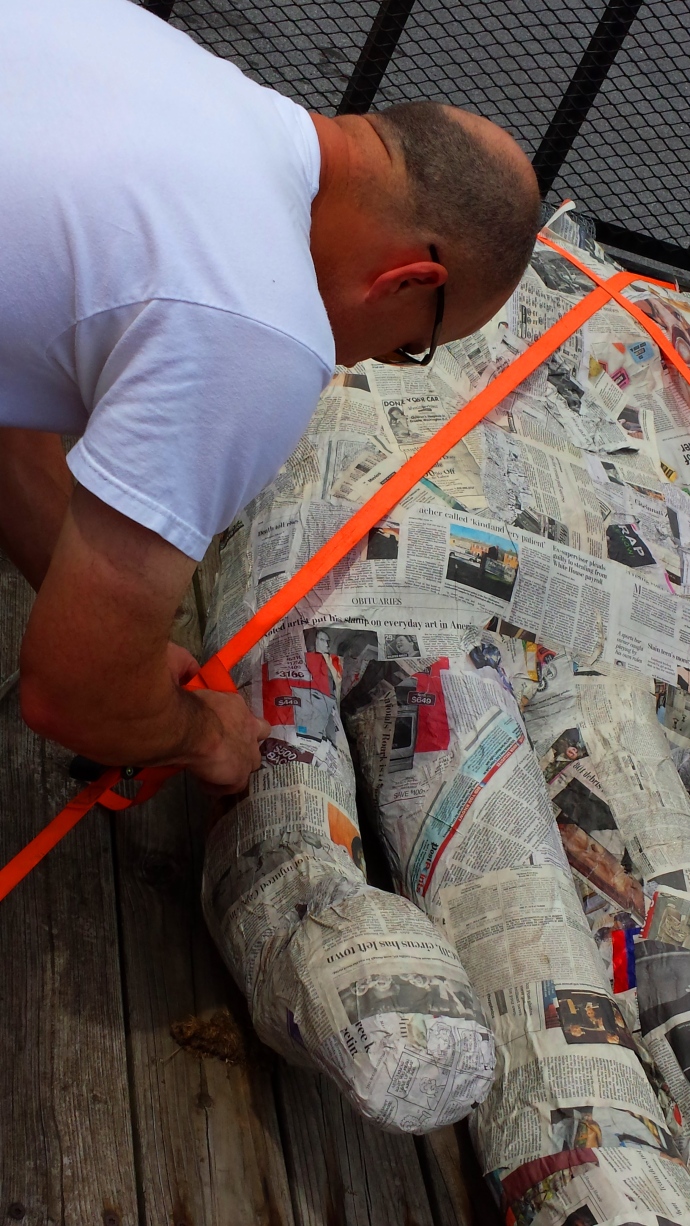 So he got out his trusty-dusty-rusty winch straps, and secured that sucker DOWN.

I offered to give him a hand…… 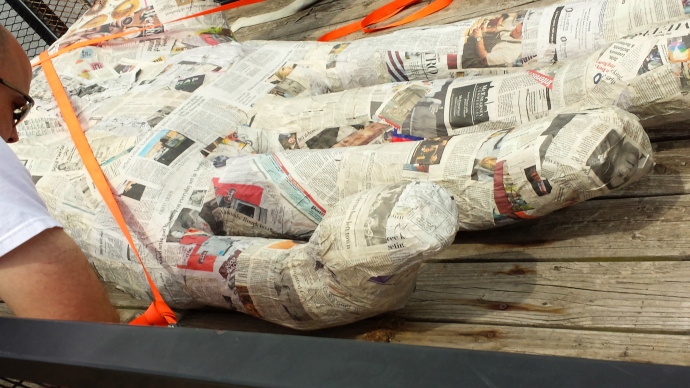 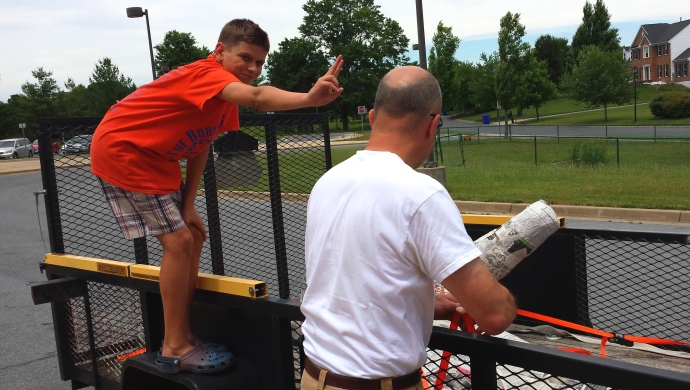 And finally,  The Hand was seen being hauled through Poolesville and Barnesville, to where it will be stored until we can work on it later this summer.

Oh, and we also went through the McDonald’s Drive Thru, and acted all non-chalant, like, “There’s nothing to see here, just a 6′ armless hand.”

Stay tuned for the rest of the story!

(And pray for My Captain!)

~ What The Heck IS Collapse Rescue, Anyway? ~

Whenever I tell people that My Captain is an expert in Collapse Rescue, and they give me that vacant, polite nod of the head, I KNOW they have no idea what I’m talking about. 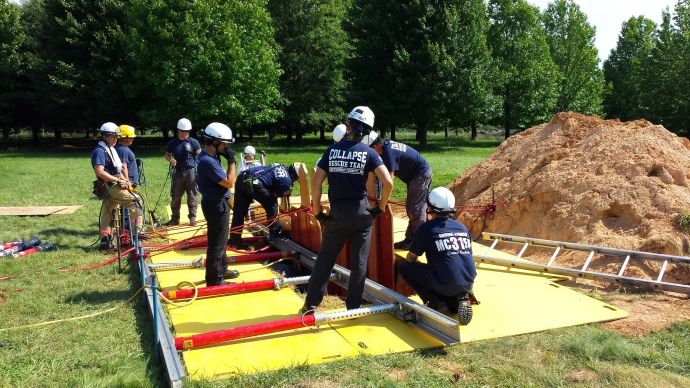 Why should they?  Most people never have a need to be rescued in a collapse, whether it be from a trench, or a terrorist bombed building.  But let’s say for a second that you did.  Let’s say you were unfortunate enough to be in a bombed building, or a collapsed work trench.  What the heck would you do?

Well, first you would pee yourself.

THEN, you would collect your wits and call 911.  The person on that end of the phone would then pee THEMSELVES, and then they would begin the dispatch, which would ultimately end up in someone deciding the resources required were more than your average fire crew.  If the dispatcher decides it warrants a collapse team, they would activate the Special Operations Technical Rescue Team…. or TRT. 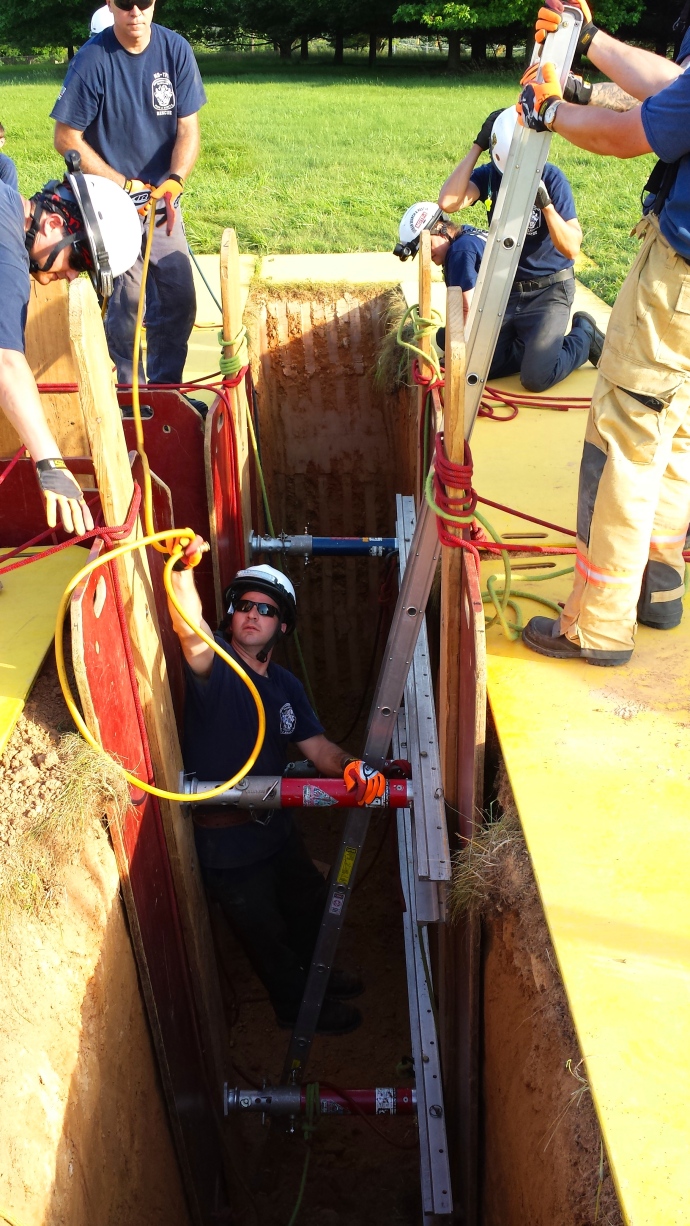 We’re lucky here in Montgomery County, because our County TRT has many of the same rescuers and technicians who are on the FEMA Urban Search and Rescue Team, (Maryland Task Force 1).  Basically, because we live where we live, and MD Task Force 1 is centralized here, we get the cream of the crop running to our aid.

And seeing as how Washington D.C. (AKA, the huge freaking political target) is so nearby, it’s probably a good thing…..

The team trains often.  Not as often as My Captain would like, but there is only so much time in a day, and only so many dollars in a budget. So they do the best they can.

Training takes many forms.  Last week, the team worked on trench collapse at the National Institute for Standards and Technology campus.  First, the TRT came in and used a back hoe to dig a hole, and then simulate a trench collapse.

After that is in, they place ground pads all around the trench to avoid causing further cave-ins.  It disperses the weight of footsteps around the compromised soil.

Now it is time to shore up the walls.  They do this with rawthar expensive shore forms made of Norway Fir plywood and Kevlar.  The point of the Kevlar is to make it really strong.  You don’t want to be in the middle of a rescue and have your shores fail.  That would fall under the BAD category.

They support the rawthar expensive shores with aluminum struts, which are air pressure forced, and then collared for even better tightness.

Once those are all in place, and only then, can our guys descend safely into the trench to perform a rescue.

Notice the yellow tube…that is sending air down into the space.

They think of everything, these guys. 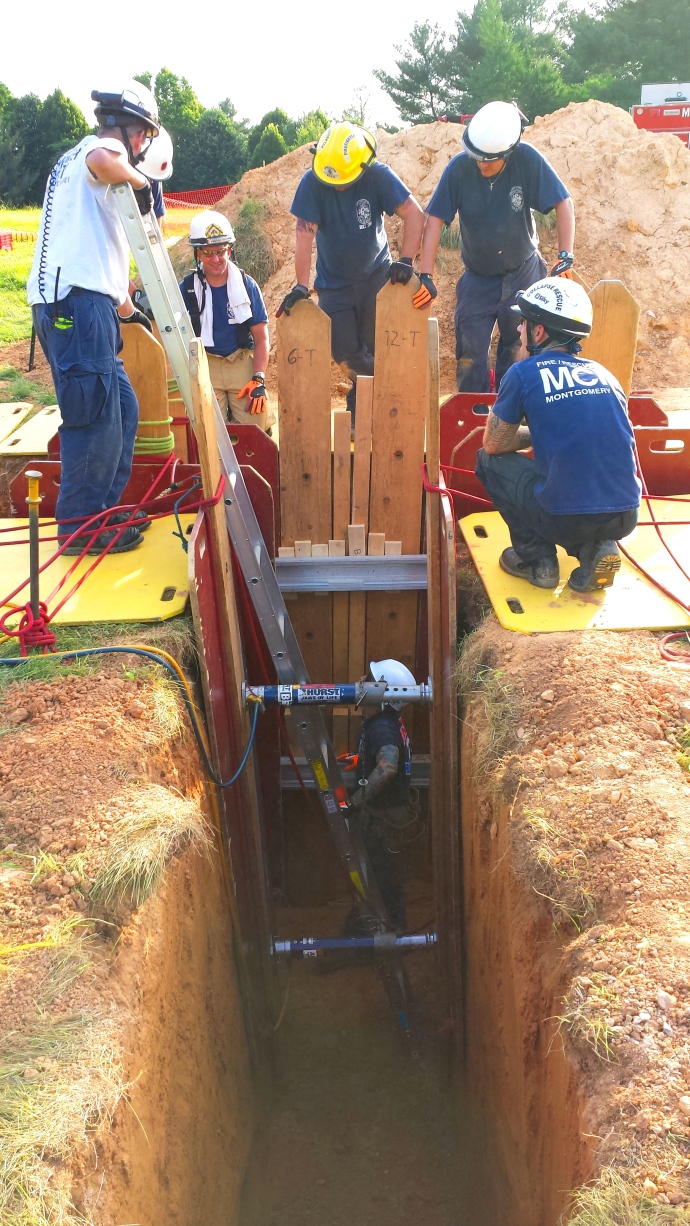 All of this has to happen as quickly as possible, obviously, but it takes hours to get it done, and done safely so we don’t accrue even more casualties.  Hence the training.

And thank God they do it!!!

~ Standing Ovation From The Cheap Seats ~

So….I just got a call from the school letting me know that my boy, Critter, the apple of my eye, got a lunch detention because when coming in from PE, he began ringing the school doorbell 50,000 times. (You can’t hear the bell outside when you are ringing it).

Everyone who has a computer connected to that door latch (most of the administration) immediately gets a video notification of whoever is ringing the doorbell before they unlatch the door.

This means that my son’s video picture ringing the school doorbell over and over and over again popped up on every administrator’s computer screen about 50,000 times.

I sure hope his sister becomes a lawyer.