~The Valentines Day That Wasn’t, But Really Was ~

Everything we attempted this Valentine’s Day,  initially FAILED.

FIRST: If you don’t know what an Aebleskiver is, lemme explain: If a Pop Over and a Pancake got married and had babies, they would be Danish Aebleskivers.   In a perfect world, they look like this:

But guess what, if you put enough powdered sugar on an Aebleskiver, it still looks good, sphere, or no sphere.  I’m not proud, so that’s what I did.

My Captain was a hero and, without complaint, delivered my powder-sugared, slightly burnt, non-spherical mini-Aebelskivers to  a couple of neighbors for Valentine’s Day.

But you know what was NOT cool?

Cleaning the mess that my new, non-pre-seasoned, mini-aebleskiver pan left on my stovetop, which now needs to be scoured and loved and rubbed with vinegar so it doesn’t smell like old grease anymore.

That falls into the NOT cool territory.

So we left that for later, like any other couple who leaves messes behind them, because they’re too busy leaping ahead into the day’s next adventures.

And those adventures today included delivering Varmint’s Valentine gift for My Captain’s best friend, Ty.  Remember Gwen outfoxed Ty at Christmas with a gag-gift that was a bust of some Roman dude, gilded and gloriously tacky.  Ty was going to give it to Varmint for Christmas last year, but she beat him to it! She picked it up at Mrs. Brown’s Attic, the coolest little knick knack store ever (in Barnesville, Maryland), and left it under his Christmas tree.  It was an entirely awesome smooth one-up.  My Varmint rocks.

After Christmas, Ty took it back to Mrs. Brown’s Attic, apparently, and this weekend, we picked it up again for Varmint, who gave it to Ty AGAIN, only this time, for Valentine’s Day.  Did I mention my Varmint rocks?

Ty and Maggie were out and about doing romantic things to celebrate, so we left the bust of Ceasar, or Brutus, or Mark Antony, or whoever the heck it is, on Ty and Maggie’s doorstep.

Fabulously decorated for the occasion, just waiting for them to come home! 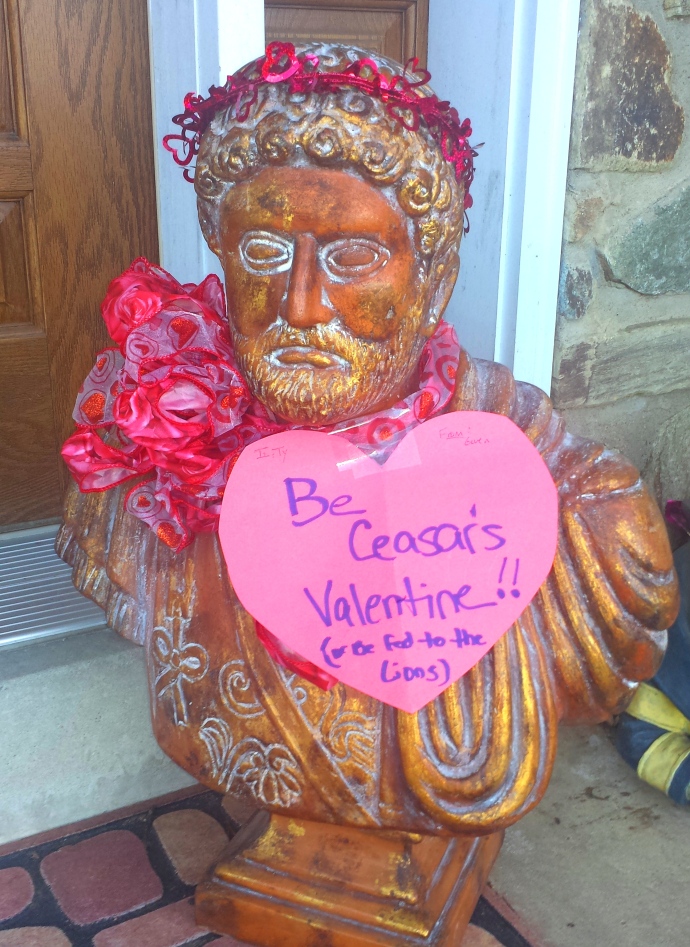 You might not be able to read Varmint’s Valentine, but it says, “Be Ceasar’s Valentine!! (Or be fed to the lions!)

Why so threatening? Look at his face!  This is not a mushy kind of Cupid. He’s more of an Alpha-Male Cupid.  You know, “You WILL fall in love with me. Over and Out.”

Sort of like My Captain is.  He looked at me, thought that thought, wiggled his highly powerful eyebrows, and I was Over and Out, believe me.  I didn’t stand a chance.

After we dropped off Ceasar Cupid,  our GRAND, Romantic plan for the day was to have NO plan, other than to go explore The Shenandoah National Park.  We had no time frame, we just wanted to wander over to the Park, (a several hour drive) drive along the ridge, and then come home after a bit.  We didn’t specify where or how we’d get there. We were just going to kind of go where the wind took us.

That’s all we had in mind.  We stopped for meals and potty trips, but for the most part we were just wandering, exploring, and seeking out new and exciting places to take the family later this year.

We saw exactly 583 vineyards, which would be AWESOME if either one of us liked Wine.  I like my grape juice fresh, and My Captain prefers Hop juice.  Micro-brewed, if possible. It’s frustrating to me, because it looks like visiting vineyards would be so much fun; I totally feel like we’re missing the party.

We saw approximately 3844 horses eating.  No one was riding them.  They were all (all 3844 of them) just standing in their pastures, for all the world looking like really expensive lawn ornaments.

And finally, we arrived at the Gateway to the Shenandoah, and Skyline Drive.  We drove up to the Ranger Kiosk to pay the fee, and were told……… we had to turn around!

Skyline Drive was closed, because they hadn’t finished clearing off the snow from the last storm!  We felt like we’d just been told that Wally World was closed.

“Sorry folks, the Moose out front should have told ya’!”

My Captain looked at me.  I looked at him, and then we both said, “We probably should have called first.”

And the Ranger, who was patiently waiting for us to turn around, agreed wholeheartedly.

My Captain turned our car around snickering, and said, “We didn’t even plan our day, and we still didn’t get it right!”

But you know what?  I don’t think we will plan anymore Valentine’s Days ever again.  They just don’t get better than this! We had a whole day together, just the two of us, a full tank of gas, and the road stretched out wide before us.

It was, simply, imperfectly Perfect.