All morning and afternoon, My Beloved Captain and his father, Papa, toiled in the sun on “The Mudpit” patio project.  It was such a beautiful day, and I felt bad that they were missing the fun of it.  They never complained, though.  They just kept measuring and sawing and hammering and sweating.

Then, unexpectedly, we heard a motorcycle pull up.  It was none other than My Captain’s best friend, Ty, who is another fire captain, out for a Saturday afternoon joy ride.  He hung out and chatted for a few minutes….

….and then we heard another motorcycle pull up.  This was our friend Richard and his girlfriend, Kelly.  Richard owns a roofing company, and he is helping My Captain on the particulars of ‘The Mudpit’s” roof.

Here’s the funny part of this: Both Ty and Richard, who have never met before, ride similar Harley Davidsons.   Neither knew the other was coming.  But our driveway was quickly beginning to look like a Harley Rally. 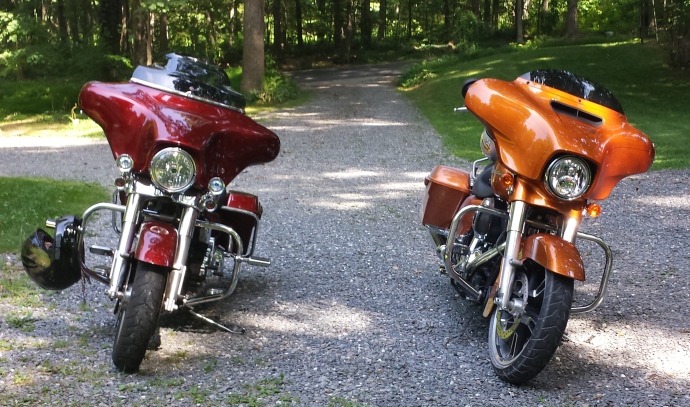 My Captain, Ty, and Kelly all went to the same high school together, which is really kind of nice. 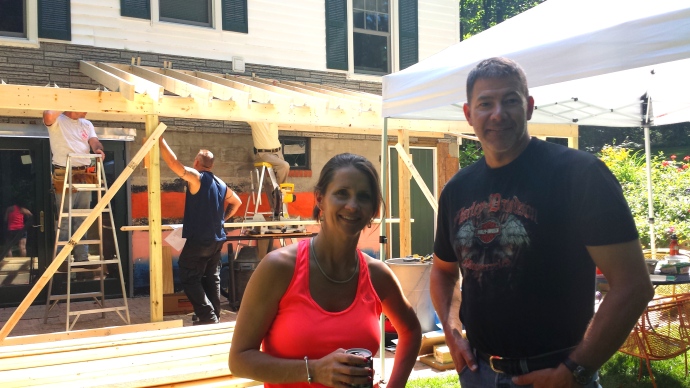 They got a chance to catch up a bit, while My Captain and Papa worked.

And Richard took a look at the structural base for the metal roof we’re going to be putting on soon, to make sure it met his specs, while My Captain and Papa worked.

He gave his professional advice on things like materials and design, while My Captain and Papa worked.

And mentioned that the bathroom vent is going to have to be moved because the roof is going to hit it, which is a huge pain in the butt, but thank goodness he mentioned it now, while My Captain and Papa are working.

It was a lot of testosterone driven manly-man talk, grunting, chin scratching, and head nodding, all while…..

….My Captain and Papa worked.

My Captain and his father, Papa, are back at it again on the back patio project, lovingly known as “The Mudpit.”  You may or may not remember this project starting a while back in “A Family Affair,” that we are building a walk-out patio on our vintage Sear’s Kit Cottage.  And when I say ‘We,’ I am using the term loosely.  It’s really just My Captain and Papa.

But I help where I can, like making sure that before they start early in the morning, they have a good meal.  Today they had huge stacks of multigrain pancakes slathered in heavily salted butter and pure Vermont Maple Syrup.  Because we are in to HEALTHLY choices in this family, that’s why.

They ate out on the soon-to-be finished patio, surrounded by the chaotic explosion of flowers that I call a garden.

They were surrounded by bird calls, the smell of honeysuckle,

and plenty of gnats.  Ah the romance of nature! 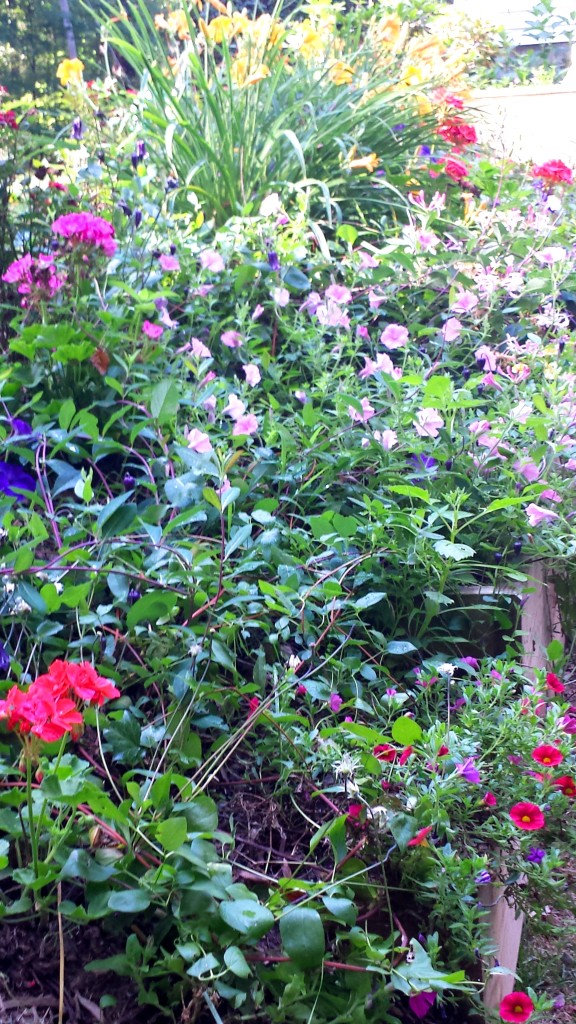 We try to take pictures along the way of this project, mostly so we have something to show the trauma team when the accidents happen.  So after breakfast, I picked up the camera, and started taking pictures of the progress….but I didn’t get very far.  Basically, I got this photo, and only this photo:

Why?  Because even after all of these years, whenever my beloved is around, I’m highly distracted.  I got that one photo of the project, and the rest were…….. 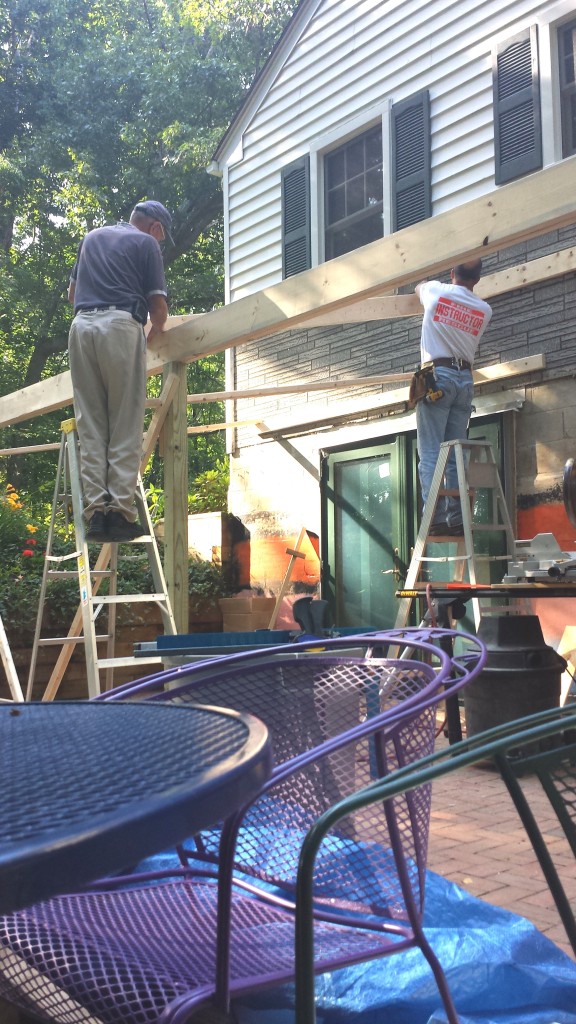 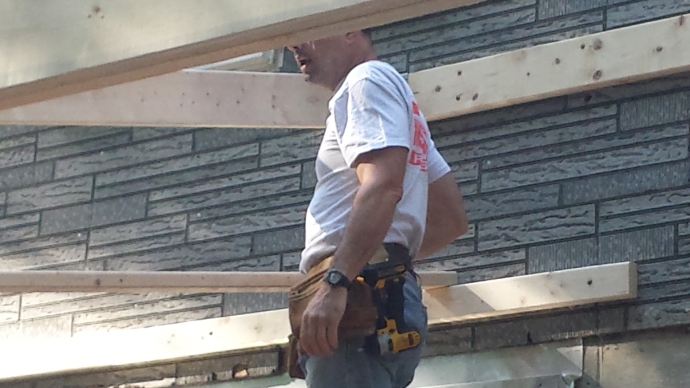 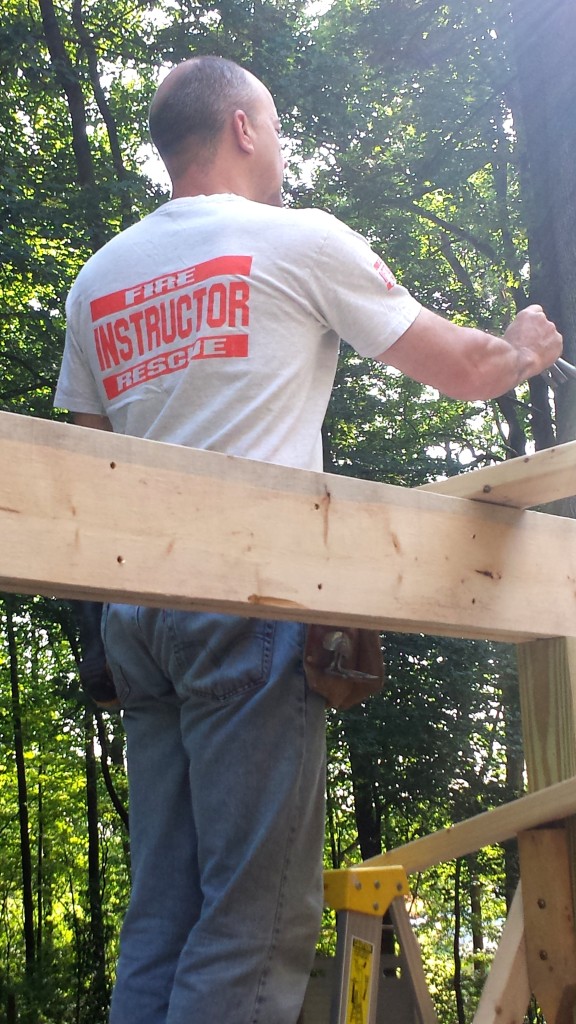 I got so distracted and flutterpated just by taking these pictures, that I then proceeded to get on the lawnmower and mow for half an hour, without the cutting blades engaged.

I wish I was kidding. 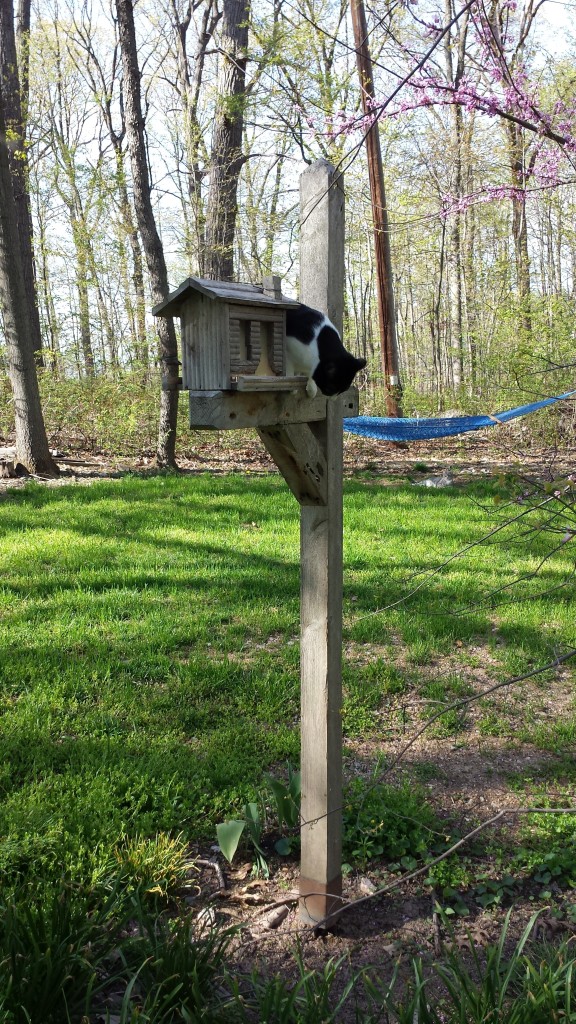 I’d laugh at you as you wait for the birdies, but I’m the same way in front of the microwave.   I won’t judge you, my hungry little friend.

~ This Summer Brought To You By Boeing ~

Varmint and Critter NEEDED to be outside today, before they shortened their lifespans.  With exasperation, I sent them out to water some new Cheyenne Spirit Coneflowers I’d plunked down in the earth yesterday.

Our hose won’t reach where they are planted, so the kids had to use the ol’ ‘haul-empty-buckets-of-catlitter-filled-with-water-in-their-old-red-Tikes-cart’ technique.  Not the most efficient technique, but it would keep them busy for a while.  That’s what I wanted.  That’s all I wanted.

Well, that, and for them not to get killed or maimed in the process.

I went back to cleaning out the nastiest vegetable drawer any fridge has ever seen.  And half an hour later, I looked out the window, vaguely wondering what was taking them so long.

They were in the midst of a waterfight, the likes of which My Captain would have been proud.  They were completely clothed, but it’s summer, and stuff like that flies just fine at The Little Cottage during summer!

I went back to the nastiness that was my refrigerator, and was elbow-deep chiseling something that might possibly have been hot pepper hummus a few years back, when I heard My Captain’s leaf blower.

You know, the leafblower capable of blowing a maple leaf into the next county? The one made by Boeing?  Yeah, that one.

I had only enough time to snap this picture through the screen door before I began belting out admonitions for Varmint to not blind her brother, and for goodness sake to not electrocute themselves as they stood in the puddles with the electric cord wrapped around their feet:

Critter will never again be able to shut his eyelids, as they were rolled back behind his skull.

But he was dry.  I’ll give them that.

So I did what any other loving mother would do.

I shut and locked the door.

Last night we ate dinner on the back deck, one of my favorite things to do.

I love the evening song of the birds as they settle for the night.  I love the dusk rise of all the fireflies from the grass.  I love the gentle breeze and the flutter of the leaves.  All of that makes my dinner taste so much more delicious.

Varmint hates the bugs in her drink.

Critter hates the fact that he has to sit and eat, regardless of where it has to happen.

And My Captain hates eating and sweating at the same time.

But they are so charmed by my romantic notion of eating Al Fresco, that they willingly comply.  (Or maybe it’s a deep and abiding fear of my threat that they won’t eat at all if they don’t get their asses out there.  Either way, it’s compelling.) 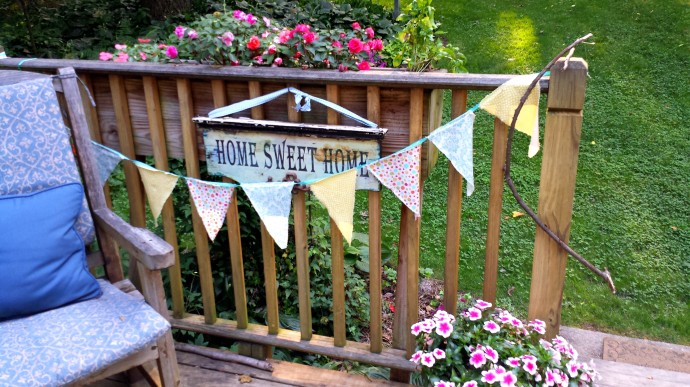 As I glanced around in my final meal preparations, I noticed something unusual. 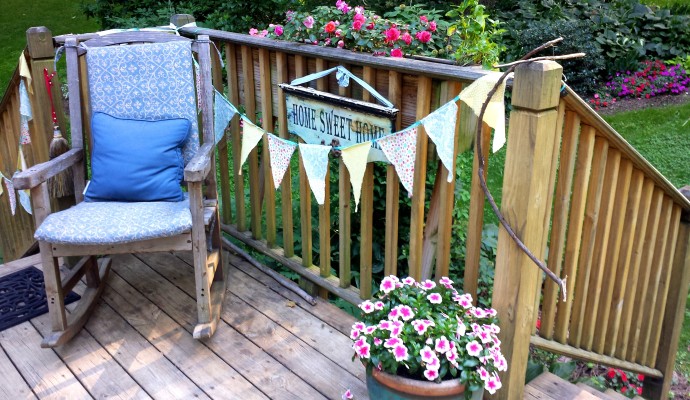 Something hanging on the corner of the rail.

A home made bow…. 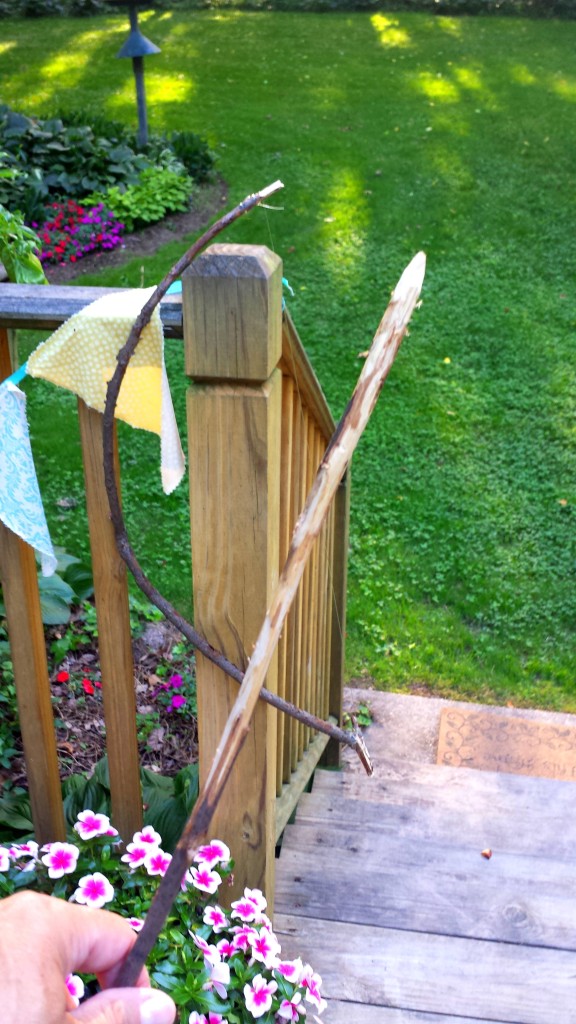 The bow was strung with something that looked shockingly like my expensive stretchy jewelry wire, and the arrow had been painstakingly sharpened.

I ran to my cutlery drawer to inspect the condition of my Cutco Steak Knives, and breathed a sigh of relief.

Critter then reminded me that My Captain had bought him another pocket knife, and wasn’t I proud of him for making a bow and arrow instead of carving his name in his bedpost like he wanted to?

And this, my friends, is why we can’t have nice things…..