I’ve spent the last few days working by myself on Pop-pop’s cottage while My Captain works 48 hours straight over the holiday.   I’ve been tearing down wallpaper from the ’80’s; I’ve been sanding, cussing, scraping, painting, cussing, re-painting, and ruining my favorite clothes.

Because wearing your favorite pink LLBean t-shirt makes  sense when you are painting a blue room.

Quick side note:  Painting floor and ceiling trim while hopped up on caffeine is not a good plan.

Apparently I’ve been working on this project for over a million years.

So this morning, because I couldn’t look at another burrito, and because I am starting to get really dagnab lonely, I decided to walk into the Town of Bethany and get myself a well-earned Ruthie’s Bakery Jelly-Filled Doughnut and maybe make some conversation.

Let me draw you a picture:  Dressed in my pepto-bismol pink, paint-splattered LL Bean t-shirt, comfort waist, Just-My-Size paint-splattered Bermuda jean shorts, olive-green smartwool ankle socks, and brown, Croc brand, Teva-styled hiking sandals, I rocked that sidewalk like only a woman who simply doesn’t give a crap about what image she projects, could.

Oh, and my arthritic knee is acting up because I’ve been on it non-stop this weekend, so I limped significantly the whole way.  I was a sight to behold.

People were grabbing their children and moving to the other side of the street, I tell you.

I didn’t care, though.  In fact, I tried to make eye contact with everyone I passed and grin at them as if to say, “I know, I right?”

Eventually I arrived at Ruthie’s Bakery, only to find a sign that read: “Closed due to Sandy and (Town of Bethany) Construction.”

My heart plummeted.  I’ve been going to that Bakery every summer since I was a toddler.  Pop-pop and I used to go and get all sticky with jelly and powdered sugar together on the boardwalk.  It was a traumatic moment for me.

Plus, I was hungry, which adds significant drama to anything.

Sadly,  I limped a couple of doors up the sidewalk and arrived at a Tex-Mex restaurant where I ordered a chorizio and cheddar omelet, and coffee.  When it came, I realized this wasn’t breakfast; this was a challenge.  Nutritionally, this was WAY worse than any Ruthie’s doughnut might have been.

This dingdang omelet was bigger than 4 McDonald’s sausage burritos, and I would never eat that many burritos in one sitting.  And it was served with whole grain toast and seasoned breakfast taters and onions.

Here’s the problem: I have always been a member of the clean plate club; I refuse to throw out food; and I didn’t feel like adding a doggie bag of omelet to my walk home.  I had to eat what was put before me.  The way I saw it, I had no choice.  I felt like I was in my own version of Man Vs Food, only it was Mama Vs Food.

I wanted to cry as I threw away the potatoes.

Limping home, I tried to shake off the sense of gastronomic defeat.  But the sun was shining on the ocean, the wood on the boardwalk was warm, and I was surrounded by cheerful early morning joggers.  In fact, I think every spandex-sporting, super health-conscious soccer mom in Bethany was jogging.  And none of them had my sense of style, I assure you.  Some of them had on more make-up for their run then I put on for….well, for anything I ever do.  But I have to tell you, I was so full that merely watching them jog made me want to puke.

But at least they could work off a 15,000 calorie omelet.  I certainly have no business eating that much when my swollen, arthritic knee barely allows me to walk into town.

My sense of gastronomic defeat morphed into frustration.   How cruel it is that I should be given such crappy joints but have such a true passionate love for food?

Oh sure, you COULD make an argument for self-discipline, but that omelet was damn tasty, and life is short.

Do me a favor and put “Damn, that was tasty!” on my gravestone, will ya?

Humility will never be a weak trait of mine.   My beloved family keeps me humble daily.

Yesterday Varmint shared that her social studies class was covering Buddha, and all of the cultural implications surrounding him.

Critter then asked who Buddha was.

Varmint attempted to explain the concept of ‘The Enlightened One’ or ‘The Awakened One,’ using all the formal language her 6th grade vocabulary could muster.

Critter rolled his eyes and asked me for a more simplified answer.

I asked him if he had ever seen a statue of a grossly fat, laughing bald man with enormous ears.

I figure I can look at this one of two ways.  Either it was a slam, intended to mock their dear corpulent mother, or it means I have now been exalted to the level of a God. 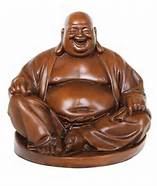 Either way, it doesn’t diminish the benefits of a good belly rub.  Am I right, or am I right?

No, I haven’t fallen off the Blogosphere.

I’ve been fixing up ANOTHER rental house.  This time it’s the beach cottage my father lived in.  It is in need of love…serious love…and my brother, Graham, My Captain, his parents, and I, have been doing our best to fix it up.

Remember last fall when I spent every waking moment fixing up My Captain’s old house?  Remember the previous renter had trashed it to the point where I was gnashing my OCD teeth and shaking my paint-splattered fists?  Remember the tic I developed from that? (Wait, maybe I didn’t share that part…)

Well, I’m having flashbacks.  And I’m spending all my time either fixing my own little cottage, or Pop-Pop’s cottage, or sitting around worrying about whether or not I can do it AND parent my children adequately at the same time.

My brother, who handles stress way better than I ever did, wishes I would stop worrying.   I laugh maniacally and wonder if he ever met me.   That’s like asking me to be skinny.  I just don’t have it in me to be calm, cool, and collected.  Or to even fake it.

I’m a spaz and I embrace it enthusiastically.

Look, there IS a point to this post.   And it has nothing to do with the above paragraphs.

A few weeks ago I was invited to speak about writing for a Literacy Night at a middle school.

The entire time I was there, many of the questions I received from the students fell along the lines of, “How do you know if your writing is good enough?”

And when they asked me, “Aren’t you afraid of people making fun of you?”  I realized that these kids did not need to hear about the world of writing.  These were philosophical LIFE questions they were throwing at me.  These were the real cares and concerns driving these pre-pubescent, angst filled minds… not the details of ‘How To Become A Writer.”  So here is what I gave them:

I can’t live my life fearing how other people will perceive me.  I’d never try anything if I did.

People do make fun of me.  So what?

Life is fleeting, and if you spend it trying to dodge the ridicule or scorn of other people, you’ll spend what little time you have here unhappy.  I guarantee it.

So I told them:  Speak and write with your OWN voice.  Walk your OWN path.  Don’t let other people define you.

DON’T LET OTHER PEOPLE DEFINE YOU.

Not your parents.  Not your teachers.  Not your friends. Not the media.  Not society.   YOU define yourself.  And that definition must not be formed by the things that HAPPEN to you, but by YOUR CHOICES.

And until you find your voice, until you define yourself, writing will be tortuous.  Because it will be fraught with doubt and worry of how other people will react.  And why would you spend your valuable time being plagued by that crap?

One beautiful, yet hesitant, young lady screwed up the courage to ask me if it was all worth it when people sent in comments of praise, or when they stopped me on the street to say they love Mamaboe.com.

My answer raised a few eyebrows.  Some of the parents were, um, NOT expecting my reply.

I told her that I can’t pay attention to good comments.  I can’t believe the flattery, or seek out the pats on the back.  Because if I DID do that, if I did give any substance to THAT definition of me, then I would kind of have to listen to, and believe, the bad feedback as well.  It works both ways, you see.  So when I say ‘Walk your OWN path,’ I mean it wholeheartedly.

Otherwise, you’ll find yourself seeking praise so urgently it becomes the force that drives you…and your writing…or anything else you do in life.

That was my message to them.  As it is to my own children.

Unless you let them.

Varmint has the uncanny knack of getting hurt in the safest situations EVER.

When she broke her elbow a couple of years ago, she did so tripping over someone at drama practice.

Who gets hurt at Drama Club?

Fast forward to tonight.  She had been helping Critter’s teacher after school with Wiffle Ball Club, along with My Captain, and managed to get a bloody knee.

When she was supposed to be just helping out, not playing.

Have you ever seen a wiffle ball?  It’s as benign as it sounds.

And yet there I was tonight, spraying liquid bandage on her knee while she bled freely in the kitchen.

I could not imagine what would happen if she took up an extreme sport.  She’d be a cross between Sonny Bono and an Ashley Twin…. all cuteness and head trauma. 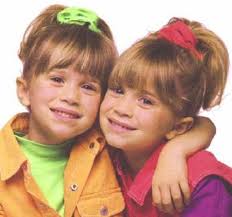 Is that analogy inappropriate?  Forgive me, I’m tired.

But come on, it’s a little funny….

Nonetheless, she’s all mine, and I love her.   I guess I’ll keep the accident prone brat.

But I ain’t standing too close to her…..

We all know that to get good at any particular discipline, you must practice. 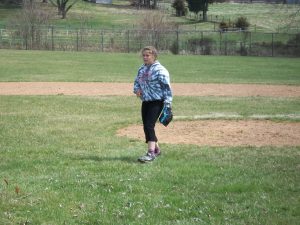 But really, not just any willy-nilly practicing will get you far. 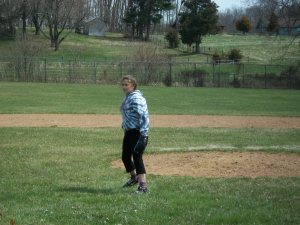 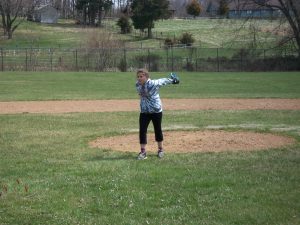 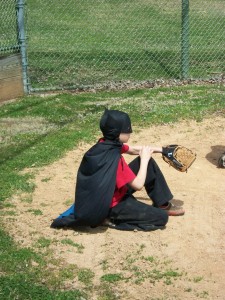 It can make the difference between Crazy-Good, and Bat-Shit-Crazy-Good. 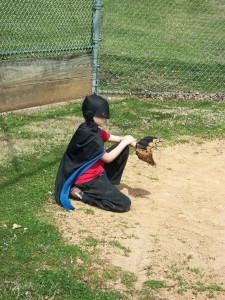