I needed a break.  I’ve been running too hot for too long, and signs were starting to show that I just needed to step back and breathe.  You know, regain healthy perspective, stop chewing my nails, stop chewing out my children, stop chewing my cud, that kind of thing.

My good friend, Cupcake, understood this, and took us out for a day of sailing on the Chesapeake Bay.

I climbed out onto the bow and laid my head on a folded towel, prepared to just relax, to meditate, to possibly sleep to the wonderful, rhythmic lapping sounds of water on the hull of the Windtrip V, Cupcake’s 36′ J-World club sailboat.  The sun warmed me while the gentle breeze made it comfortable.  The sound of far-off seagulls reached me and all was right with the world.  I could feel the muscles in my shoulders begin to ease.

And then the wind picked up.

Which of course made us tilt.  List.  Lean rather alarmingly….

…with Mama up on the bow.

Did she fall off?  Nay, nay!  She gripped the side rail of the deck with a viselike clamp that bespoke years and years of figuratively holding on for dear life.

Did she get up and yell at Captain Cupcake?  Did she curse the wind?  Did she cry and wail and gnash her teeth?

Nope.  And you know why? 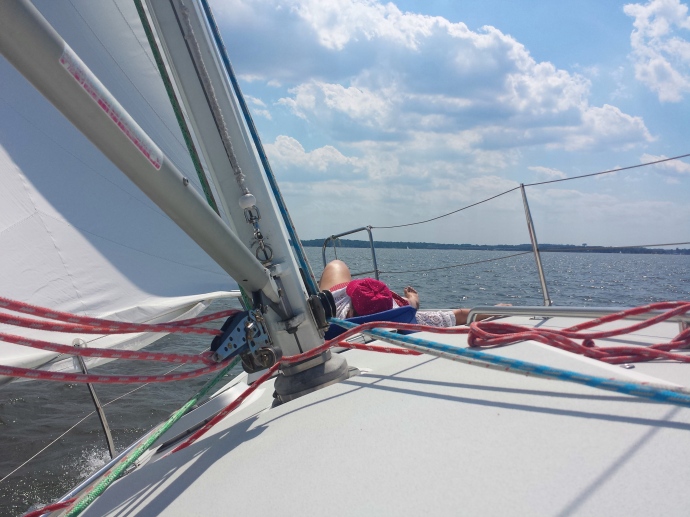 Pure, Intense Determination.  Now maybe some people might not pair the concepts of intense determination with relaxation. I realize that.

But that is how I roll.  Only I wasn’t rolling.  I was solidly on the bow, gritting my teeth, refusing to not relax.

Look, it makes sense to me.  Just go with it.

~ We’re Just Trying To Get To The Beach ~

It wasn’t supposed to be a big deal.  It’s a 3.5 hour drive on average, sometimes longer if it’s a holiday weekend.

My Captain was masterfully driving the mini-van through the crowded, busy speedway that is Interstate 495.   I kept a steady stream of inane banter going to entertain him.  I’m sure he appreciated it greatly.  Who wouldn’t?   Incessant drivel….it’s one of my charms.

Then it happened, his entire body tensed and he slammed on the brakes.  The sickening sound of squealing tires on asphalt filled the air.   We all held our breaths and waited for the painful crunch.

But none came.  My Captain’s evasive maneuvers training (from when he was a Fire Marshall) had kicked in, and he managed to escape the crash. He was totally channeling Burt Reynolds in Smokey and The Bandit as he angled our car away from harm in the split second that this all went down.

Four or five cars in front of us were not so lucky, unfortunately.  There were asphalt bits, smoke and debris flying everywhere.  Cars spinning.  Cars leaving the highway at weird angles.  The sound of impacts among the trees along the side of the road.

And then it was over as fast as it happened.

My Captain pulled the van over to where a man holding a baby had just bolted out of one of the spun cars.  My Captain dropped me off to take care of him, and then went further up the road to the cars that had careened off the highway and into trees.

The man with the baby held his head, looking baffled and stunned.  I took his son and had him get all the way off the road as I began asking him questions as ingrained in me as they were back when I was a paramedic.

My Captain was knee-deep in poison ivy helping a woman who had T-boned a tree.  Sirens could be heard in the distance. 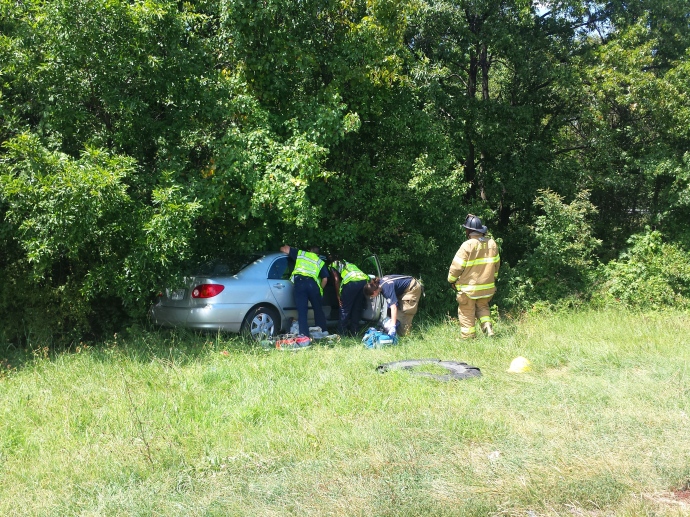 I moved the man and his son out of the hot sun and into our air conditioned and quiet minivan, as we waited for the medic unit.

The fire department from Prince George’s County arrived, My Captain gave them the update of the situation, and everyone eventually was taken to the proper rescue apparatus.  Traffic was well and truly hosed.  The mayhem and carnage had blocked several lanes.

I reached for the Clorox wipes and began methodically cleaning any surface the victims had touched in our van.  Critter and Varmint were wide-eyed, having gotten to see, perhaps for the first time, what it is exactly My Captain does so well: Make order in the midst of chaos.

It took a while for us to get back on the road, but eventually My Captain eased us back into traffic, unruffled and unshakable, as he always is.  We’d hardly begun our trip, and had just spent a good portion of an hour helping the folks at that accident. We still had a good 3 hours ahead of us, and traffic was still thick.

The van was quiet at first, as we all assimilated what had just happened.   And then Critter, in his distinctive 12-year-old voice pitifully asked,

Seriously.  We’d just witnessed and helped clean up a disaster, and even had close interaction with the victims in our own car, and that was all Critter could focus on.

In his defense, though, it IS the beach we’re talking about….

~ And Then He Kissed Me Good-Night ~

I was so pissed at him last night.

My Captain had JUST finished his medicine as he battles Lyme’s Disease.  He had just spent the majority of the day fighting a muscle spasm in his neck.  He had been “draggin’ ass” since he’d gotten up yesterday morning.  He looked like hell.

Our router got fried by lightening, and he had purchased a new one.  Mind you, I was fine limping along on the old broken one, (and by fine I mean I bitched only a little bit), but he insisted getting the new one up and running before he left for what would likely be a 48 hour shift. Unfortunately, he kept running into glitches, and it was frustrating him to no end.

Here’s how it went down:

It was nearly midnight when I yelled, “Would you come to bed, already?!  It’s a stupid router!  It will be there when you get home on Monday!”

He mumbled something unintelligible in response as he remained solidly locked to his laptop, the muscles in his strong jaw working as he furiously typed commands.

“Dammit, Honey, why are you so wound around the axle about getting that router set up tonight?!”

“Because I’ll be gone for two days, and I know you’ll want the Sonos to work so you can listen to your old radio shows.”

“Oh.”  (I paused and swallowed the lump of love suddenly lodged in my throat.) “Well I won’t enjoy a moment of those shows if I think you are exhausted on the job because of it,” I grumbled.

So we were at an impasse.

And by impasse, I mean that he dug his heels in and kept working on the router until it was done, and I sat in bed fuming about it.

When he finally came to bed, leaned over and tenderly kissed me good-night, I thanked him, and rubbed his sore neck, and told him I loved him.

And then I smacked him on his hiney and told him not to be such a stubborn mule….

…but he was already snoring.