When I was studying to become a Paramedic, one of my preceptors name was ‘Cupcake’.  Actually, it’s his nickname, but no one uses his birth name.  And, in fact, Cupcake is most often called ‘Cuppy’ by those who know and love him well. He’s got a nickname for his nickname.  Don’t see that too often, do ya?

Sometimes people will ask why we call him this ridiculous name.  I’ll get to that in a moment.

Understand, Cuppy is a BIG guy.  In all ways.  Strapping. Strong. and oddly, Cherubic.  I don’t know how those all mesh together, but he makes it work.

Cuppy has a fantastic sense of humor.  No prank is too big or too small for him.  And he’s no dummy, either.  Graduated from George Washington University.  Is a member of Maryland Task Force One’s Urban Search & Rescue Team.  Teaches Paramedicine.  Teaches Scuba.  Teaches Sailing.  Loves motorcycles.  Loves his Whiskey, and an occasional cigar…but only if he’s been at his whiskey.   Has a laugh and a smile that is more infectious than half the diseases we transport in the Medic units.  (ew.) 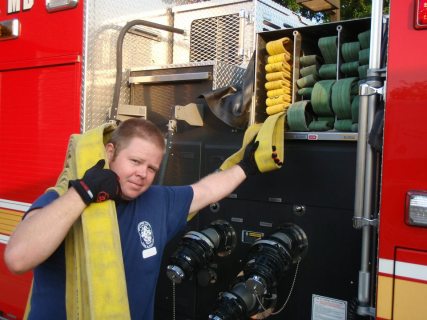 So here’s the story:  He was fresh out of the Fire Academy’s Training class…about to embark on his Rookie year at Germantown Fire Station 29.  Knowing it is customary for a Rookie to bring good eats for the whole shift his first day, he stopped by the station to ask them what would be a good food item to bring.  It happened to be a different shift than the one he was joining.  With a smile, a seasoned, leather-skinned, wise-ass Lt. suggested he bring…. cupcakes.

So, in he waltzed on day one, and made his first impression to his manly-man co-workers…. the men and women with whom he would be fighting fires side-by-side….the men and women who would be counting on his manly man-ness to have their backs…the men and women who were currently in a shift-wide weight loss challenge…. with three boxes of cupcakes.  You could have heard a pin drop.  Mouths went agape.  Eyebrows raised. Finally, one of his new shiftmates, in no uncertain terms, let him know, “BOY!  You can’t bring cupcakes to a fire station on your first day!  You gotsta bring Meat!  Preferably Red!  What kind of fool idea is this? Where did you get this hairbrained idea?” (I’m paraphrasing…)  He sheepishly admitted that the other shift suggested it….which explained everything.

And thus Cupcake was introduced to his new fire fighter family as the Dupe to another Shift’s “gotcha”.

And his new name was born.

And he’ll never live it down.

On a more serious note, Cupcake’s real name is actually Chris, and he was always more kind to me, more patient with me, and more understanding with me than anyone else in all the stations I have ever ridden.  I’ll never forget him.

Or the time he tied my bootstring to a patient’s cot when I wasn’t looking.

I stopped by my kids’ school today to join my Varmint and Critter for lunch.  I got there a little early, so hung around outside with the recess Aide watching the kids play an impromptu game of Soccer.  It was a fierce battle between the 4th graders and the 5th graders…and it was brutal.  Pele himself would have been afraid.  Those little guys and gals don’t follow any rules that I can see….it reminded me vividly of Calvin and Hobbes and their invented game, Calvinball.  (For those of you who have been living on a deserted island for the last several decades, in Calvinball, one makes the rules up as one goes along. Rules cannot be used twice. No Calvinball game is like another and it can involve wickets, mallets, volleyballs, and additional equipment as well as masks.) There were kids running and laughing everywhere; they were all having a complete and total blast.

It was a gorgeous day.  Sun was shining.  60 degrees.  Slight breeze.  Sugarloaf Mountain was in the background.  The surrounding farms looked idyllic and peaceful.  I thanked the Lord above that my children are lucky enough to be raised in this place, the Montgomery County Agricultural Reserve. I was in such a good mood, feeling grateful and blessed.   All was right with the world.

And then the recess aide asked me nonchalantly, “Have you heard that someone is suing the farmers for farming around Laytonsville in Montgomery County, and this could affect the Ag Reserve?”

I thought she was kidding.    I waited for her to crack a grin.

Turns out, as we speak, farmers in Laytonsville are being sued and prevented from farming by residents in developments that form homeowner’s associations with covenants that do not allow for farm activities in the Reserve.  If they win, this would directly impact the farms in the Ag Reserve.

To put it in plain English…. Within the last few years, someone decided to build a bunch of homes near rural Laytonsville.  And then, they formed a covenant that said, “No Farming!”, and decided to sue the farmers for doing what they have done since before the revolutionary war….er…farm.

It boggles the mind.  I sure hope the people suing the farmers don’t get anywhere with this.  It would be so….wrong!  I can’t think of a more fitting word for it.  Wrong.  It would be as if the legislators were playing their own game of Calvinball.  Make up the rules as you go!

The rest of the recess and lunch hour with my Varmint, a large dark cloud hovered over my head.  I couldn’t wait to get home to write the County Legislators a letter in support of farm legislation MC 16-12.   And I’m so grateful that the recess aide just happened to mention it.

Even if she did kill my buzz.

It was a dark and windy night.  It was snowing outside.  The windows  rattled.   Trees swayed menacingly.  Brrrrr.

Sounds like a good time to be half-naked in a satin, sequined, lacey negligee, right?

Look, people, I don’t care if you call me old, or frumpy, or sex-less.  Winter is for flannel.  Period.  And socks.  Thick ones.  Fleece, if possible.    If Victoria Secret had half a brain, they would be making their skimpy little nighties out of thick pile flannel, possibly with some battery operated heated underwires.  Someone write them a letter for gosh darn sake.  Truth be told, the Victoria Secret models could use a little insulation.  They all look like they need a sandwich,…. or five.

And while I’m at it, let’s talk about underwires.  Who in the world thought THAT was a good idea?  A misogynist, obviously.   Why not add some rebar, fiberglass, and sandpaper in the cups while we’re at it?

And don’t get me started on the ideas of thong underwear.  Good Night!  It’s asinine.  (get it?  Ass-inine…)

And for you men who think it’s a woman’s place to dress uncomfortably to ‘please her man’, may I gently suggest that you try on some of these contraptions and see how sexy you feel!  I’ll tell you right now that amorous is not what you’ll be feeling.  Cranky, annoyed, and irritated is what you’ll feel.

I’ve always delighted in a sense of individuality.  I don’t bend easily to other people’s whims.  I don’t often follow the crowd.  I just walk my own road.  Pride myself on it, really.  So it was not normal for me to do something as stupid as I did last summer.

Well, it might be normal for me to do something as stupid as I did last summer, but if it is, I’m blissfully unaware of it.

I know, I know.  I feel the same way.  What kind of idiot swims in glacial meltwater?

You see, we were rafting down the McDonald Creek in West Glacier, 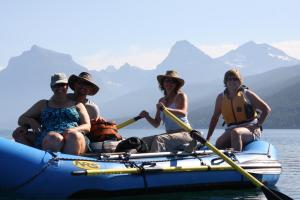 when we came upon a large rock.

Almost a mini cliff, really.  And the ladies informed us that it was tradition for newcomers to the creek to jump in from the rock. 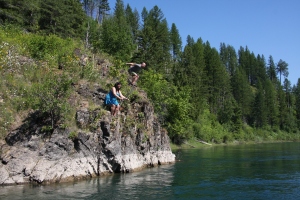 I know, I know.  What kind of idiots do something so illogical just because others before them did it? 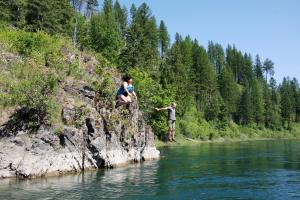 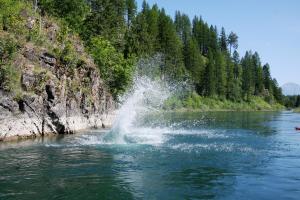 And it was colder than the contents of a million ice cream cones.  (Please don’t ask me where I got that metaphor.)

We are talking the mother of all ice cream headaches.

I became one big goose pimple.  And at my weight, its more like a goose boil.

…..I’ll do something equally stupid, most assuredly, but it will be different.

The closest town to me, Poolesville, is a Mayberry of sorts.  Small town, USA, on the outskirts of Washington-DC-Metropolis-from-Hell.  (No really, that’s what they call it.)  And since it sits so near to the county Agricultural Reserve, it is fairly protected from Urban Sprawl and its associated ‘progress’.    The Ag Reserve is fighting its own battles to keep development and sprawl from infecting its pristine, rural heritage, but Poolesville is in an odd situation.

And now, a big blow, we’ve just closed our one and only grocery store.  A family run IGA that has been around for decades and decades and decades….closed its doors for the last time this weekend.  Its name was Selby’s, after the family that started it so long ago. 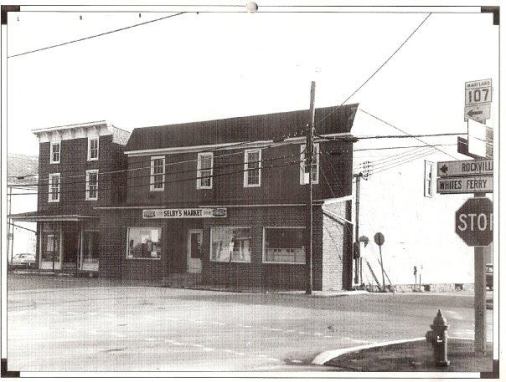 And it started out as kind of a General Store, in an old building with wooden floors.  Mr. Selby was well known and loved in the community, and his business was needed and welcomed.

Over the years, the town grew a little, the store moved locations, became an IGA, and it looked like it would be a successful grocery to serve a larger community.

But that community never grew enough, and other stores on the roads into Poolesville, like Safeway and Harris Teeter, began to take larger and larger pieces of the market.  Selby’s was a straight forward grocery.  They couldn’t easily compete with stores that had banks or Starbucks, or pharmacies.  And, even though the Selby family supported the community in areas like the local firestation, town clubs, town athletic teams, parades, etc, the community just didn’t have enough capital to keep Selby’s running.

And now it has closed.

As you can imagine, the little town is upset.  People keenly feel the Selby family’s pain.  Change is so difficult, even in the best circumstances.

One of ol’ Mr. Selby’s granddaughters, Lisa, is a friend of mine.  A harder worker I don’t believe I have met.  Her heart was definitely in her family’s business.  What could I say to her with the store closing? Everyone else in the community was saying all the sympathetic, loving words they needed to hear.  But so much of it was piteous.  Sad.  Doleful.  Dejected.  I kept thinking, “That won’t help them move on.”  Sure, it would help them know they were not alone in their disappointment.   Literally hundreds of people were sympathizing.  Appropriately so.

Yet it wasn’t what was in my heart to give her.  I wanted to say something to her that would give her some light.  Some optimism.  A different perspective.  Something hopeful.

On my living room wall is a cross-stitched plaque that was handmade for me by a friend when I was going through my extremely painful divorce years ago.  It reads simply:

Every Ending Brings A New Beginning

So I sent her that thought.

I am so sorry the store closed.  But I do look forward to seeing what paths Lisa and her family take in the future.  The world is their oyster, if they can see it that way.

And when you think about it, that applies to all of us.