I made a Lemonade Pie today, because I was hot, because I’m talented in the kitchen, and because the pie has, er,  only 4 ingredients in it.

1 small can of lemonade concentrate, thawed.

Here is where I screwed it up.

“What?” You say, incredulously.  “How can you screw that up?  It’s ridiculously simple.”

Well, like anything else, I just don’t know when to stop.  So after I put it together, I decided to get all artsy-fartsy-food-network-Paula-Deen-crazy and decorate it with slices of lemons I’d dipped in sugar.

Do you know what that did?  It made runny lemonade on the top.

So don’t be me.  Follow the instructions and leave it in its unadorned glory.

It’s so simple even a simpleton couldn’t screw it up.

~ Never Eat Anything You Can’t Lift ~

One of our nightly summertime beach rituals….one that is a tradition that goes way back into my childhood… is walking into the Town of Bethany and getting an ice cream cone.  Sometimes we linger to listen to the band-du-nuit, sometimes we walk on the boardwalk and get eaten by mosquitos, sometimes we just sit and people watch.  But whatever our whim may be, it starts with  the cold deliciousness of frozen milk and sugar.  What evening could go wrong when it starts with that combo?

We allowed Critter and Varmint to bring a friend this year.  And we introduced them to this hallowed tradition.

They didn’t fight it.

But here is where things got interesting.  Our friend Megan, who is a ballerina, among other things, and has no extra body fat to her name, got the largest, most impressive ice cream cone I have ever seen.  It was on a King Sized waffle cone.  It was several scoops.  It was adorned with the most beautifully beachy colored sprinkles.

And it was as big as her head.

My Captain took a picture of her with it.  You know, something we could show the ER docs when she went into hyperglycemic shock. 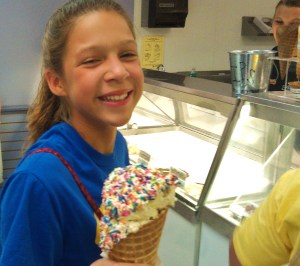 And we all laughed at the thought of her actually consuming the whole…or even most of it.

Well, she did.  She dispatched that bad boy with alacrity.  Even ate stray fallen sprinkles she found on her shirt later.

I was immediately filled with awe and great respect.  My whole life I’ve been a ‘chow hound’, impressing all of my friends with my gastronomic feats.  But here was this little 50 pound sweet girl who demolished that cone like weight watchers at an all you can eat Chinese Buffet.  It verged on horrific, but never quite crossed that line.

And then I was tossed into a deep depression, the likes of which you’ve never seen.  I had realized that she COULD eat like that and still be thin and spry and nimble.  If I had eaten that, I would be asleep in ten minutes, AND gain five pounds in the process.  I became jealous.  Then filled with anger. Then I took a sharp left into Denial.  Until I finally achieved acceptance.

I’m speaking to her again, finally.  But I ain’t buyin her no mo ice cream.  No sirree.

That’s for My Captain, and HIS hollow leg to do.

She and her friend, Megan, went out to dinner “As Big Girls” at Grotto’s Pizza in Bethany Beach.  And by “As Big Girls” I mean that it was something different from going up to a McDonald’s counter and ordering dinner.  It was dining at a sit-down, hostessed, use-your-manners-at-the-table, kind of restaurant.  They had their own money, they had their own cell phones, and they had years and years of coaching.  They were ready to fledge.

This was it.  This was Varmint’s first, experimental dinner out without Mama and Troy.

After a little gnawing of my knuckles, and after several false starts where I actually, appropriately, stopped myself from hovering, I crumbled and called her.  You know, just to check in. Not because I was worrying.  Not because I was trying to control her.  And not because I was afraid they would fail.  I just realized that I had forgotten to teach her how to calculate a TIP.

Me: Good.  Look, I don’t mean to disturb you, but I need to tell you how to figure out a tip.

Varmint: That’s ok, Mom, my phone has an App for that.

I sat staring at my phone for a moment.  My 11-year-old daughter had just “App’d” me.  Is there any more obvious message that I had become obsolete as both a mentor and a fount of knowledge?  Could there have been any more tangible way to deliver that blow?  She didn’t need me.  She had her phone, which did everything she wanted, and probably with greater speed and accuracy than I could.

A simple choice stood before me:  curl up in the fetal position in a corner, sucking my thumb, and wishing for my own Mommy, or take the hit gracefully, with aplomb, and model to my child that change is good.

…..So while I was in the corner, I thought of the perfect solution:

Steal the battery out of her phone.  Sabotage her development.  Delay her progress.

Clearly I was meant for the selflessness of Motherhood.

It’s hot here in Bethany Beach, Delaware.  Over 100 degrees in the shade.   And here in Pop-pop’s cottage, there is no central Air Conditioning.

But I’m at the shore!  The sea breeze is on our cheeks!  The ocean is a cool, refreshing, escape from the heat, right?  My kids, who are frolicking around in it with their friends for roughly 6 hours straight each day are not suffering from the heat at all!  They are happy as playful dolphins! Laughing and splashing and all kinds of merriment abounds out there in the deep blue.

Oh wait.  I’m not allowed to swim.  My Ortho dude, Dr. Raffo, has evilly declared that I am not to swim for something ridiculous like 6 weeks post surgery.  He blathered on about bacterial infections or Gangrene ….yada yada yada, blah blah blah.

And he said, “Stick your feet in a bucket of water and close your eyes.”

I whimpered, “But everyone else is out in the ocean having fun!”

And he said, “Stick your feet in a bucket of water, close your eyes, and sip on frozen margaritas.  You’ll have fun, too.”

I told you I loved this doc.

I readily admit that I’m not your normal mother.  I’ve certainly got my, er, quirky maternal ways.  So far, it’s turned out some pretty neat kids.  But there are weaknesses that I wish I didn’t have.  And one of them is being able to share my Varmint’s girly-girl ways.

I never liked to play with Barbies as much as she does.

I never got into painting fingernails or playing with hair the way she does.

I don’t even have to tell you that fashion is not an interest with me (as I sit here in my KMart clearance sale tan and white seersucker capris….WITH super high elastic waistband, thank you very much.)

And my worst failing is that I never, and still don’t, have interest in playing dolls.  In Varmint’s case specifically, American Girl Dolls.

She has a collection of them…half given as gifts, half she has actually earned the money for and purchased herself.  And Grandma Jane has sewn many new and wonderful dresses and nightgowns and sleeping bags for them with her fabric scraps.  Many of them matching Varmint’s own dresses. 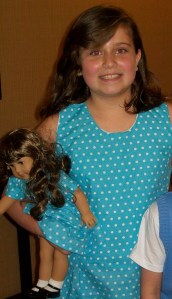 So when Varmint has a friend over, one that does share her girly girl ways, I am so grateful.  Her friend, Megan came to stay at the beach with us, and she and Varmint were away upstairs in their little bedroom dormer in the little cottage for a long while.  Eventually I began to wonder….what could they be doing all this time??

So I crept upstairs to find this: 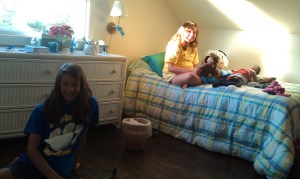 American Girl Dolls out and getting lots of love, and fingernail polish galore. 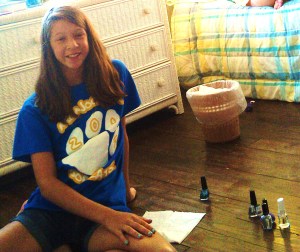 Blue and silver sparkly glitter fingernail polish, to be exact.

My Varmint was in Nirvana.

The girls because they were doing the girly things they love to do,….

and me because I wasn’t!