So many of my previous posts have starred my son, Critter, and his many endearing antics. He is a handful and will most likely be the next Dick Van Dyke when he grows up. If we hear one of the cats cry out, or if there is the sound of breaking glass, or the thud of something heavy bouncing down the stairs, we generally look for him.

But I DO have another child. The beautiful and talented Varmint. 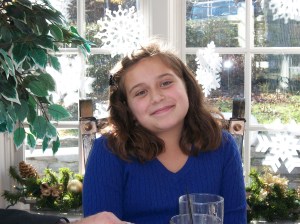 My dad used to call her his ‘Rosebud’ before he died. I call her ‘Varmint,’ ‘Peanut’, and sometimes, ‘Butthead’, but only on special occasions.  She is, without a doubt, one of the funniest, sharpest-witted 10.5 year olds I’ve ever met.

But Varmint is a worrier.

(Oddly enough, by the looks of her room, she doesn’t worry too darn much about pleasing her Mama.)

This excessive worrying drives her to go above and beyond the call of duty on too many things. If anyone is ripe for an ulcer, its her. For example, at her school recently, each 4th and 5th grade child had to choose an historic figure in the Revolutionary war, and play the part of that person in a little “wax museum” for parents. Each kid had a lengthy report of facts about their character. And they read these facts. Well, MOST of them did.

Varmint memorized her page of facts, and acted it out as if she was Sarah Bernhardt.

“Why?” I asked?
“Because the teacher said she would like it if we had good eye contact while we were in character.”

I just stared at her. Lemme get this straight. The teacher mentioned eye contact is a good thing, so my daughter memorized a bizillion word essay to please her.  Understand that in preparation for this, we cried over this report.  We lamented over how much work it was.  We fought through each and every agonizing stressful moment of it.  ….and we didn’t have to??

I took a deep breath. “Alrighty Then.”

My goal now is to teach this child the meaning of “So What.”

It’s an important phrase that a wise woman once suggested that I, in my over-achiever, Type-A personality, adopt.  The point is that nothing any of us may fail at will result in end of the world. The universe will not implode if we screw up. (Probably.)

Not enough time to finish homework? So What?
Not straight A’s in class? So What?
Art Teacher doesn’t like your work? So What?
Hair a bit out of place? So what? Its not the end of the world!

Perspective is a hard thing to maintain. We are so tiny in this universe. Our biggest problems don’t amount to much at all. But in the day to day minutiae crap, we forget this! So I try to live with “So What” and not get wrapped around the axle about the small stuff if I can help it. And she so desperately needs to learn this, too. Soon. VERY SOON.

Now, Critter, on the other hand…..