The school nurse called me yesterday and said, “OH MY GOODNESS! Come get your son; he’s on death’s door!!!!”

Wait, now that I think about it, that isn’t what she said, it’s what I heard.  I think she really said something like, “Your son isn’t feeling well…..”  and then I didn’t hear the rest of it because I had already dashed out the door to my car, leaving the phone dangling from the wall.

I found him sitting on the edge of the nurse’s cot, backpack in hand, looking pale as heck, and could see it was taking every ounce of energy he had not to burst into tears.

Which meant, of course, that it was going to take every ounce of energy I had not to burst into tears.

And if that had not been enough to determine that he was really and truly sick, when I wrapped an arm around his shoulder and walked him to the car, all he said was, “Mom, can I just go to bed now?”

Oh holy crap.  This kid was some kind of sick.

I laid him gently on his flannel sheets, bundled him snugly in his down comforter, turned off the lights, closed his curtains, gave him some cherry flavored liquid Tylenol, and kissed his feverish forehead.

“Thanks Mom; I love you so much,” he whispered as his eyes closed, and he curled into his pillow.

A couple of hours later, he called for me, and when I opened the door, he asked me if he could have some chicken soup.  DONE.  Anything to make him suffer less.  I whipped up some Campbell’s Cream of Chicken Soup, poured it into our favorite mug from Holly’s Restaurant (on Kent Island), and took it to him.  I had to go back into the kitchen to get him a napkin and when I returned, I found this:

My Critter was feeling fractionally better for the nap…. 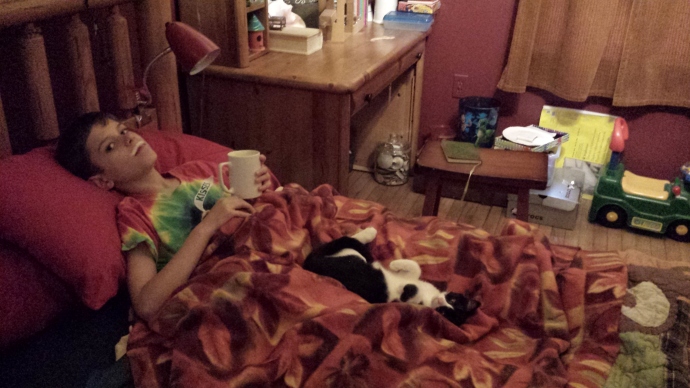 …and the chicken soup…. 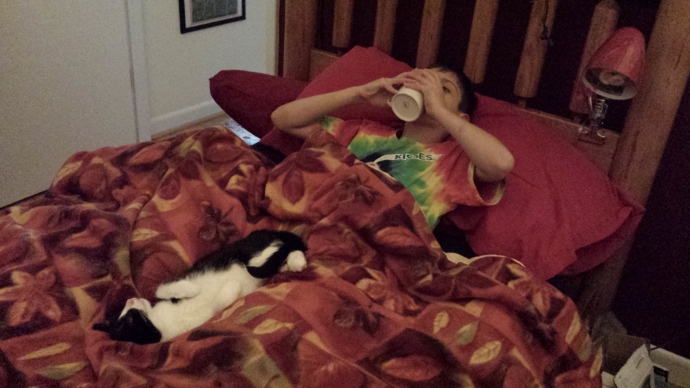 …and the love of Sir Monty.

Even if Critter has Strep Throat, life is pretty dadburn good!!