For the last six months he’s been in training.  He’s met every challenge, every plate, every fork, resisted every desire to push away from the table.

Six months of “You can do it!”

Six months of “You are SO close!”

For six months, Operation Twizzler has been in effect.

It’s mission:  To reach the required height of Twizzler status for Hershey Park so Critter can ride the big roller coasters, including the new SKY RUSH.

Every milestone towards it has been diligently recorded.  Every possible fatty food has been stocked and consumed. 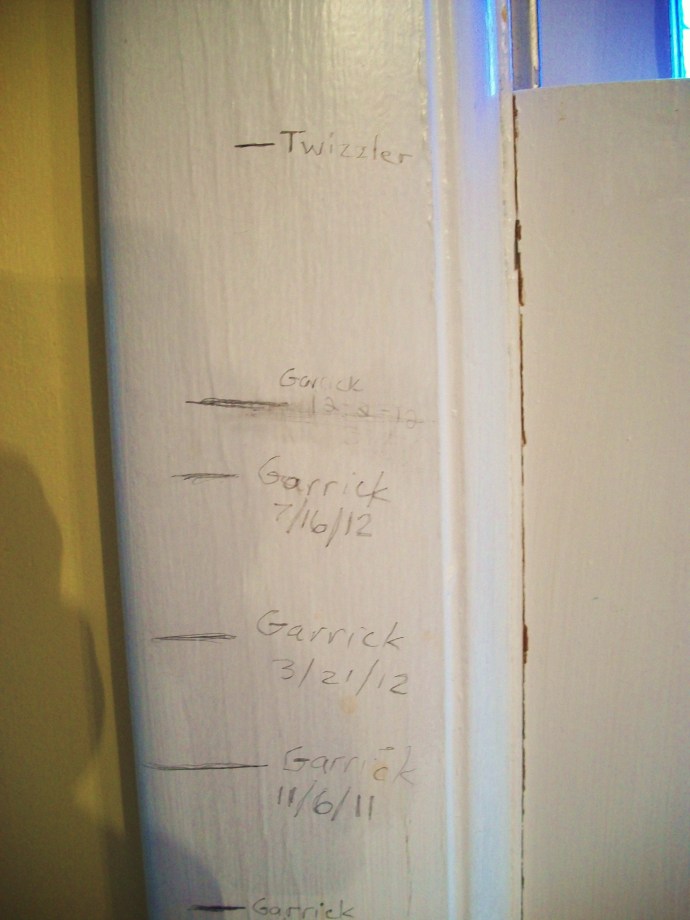 He hates eating.  Eating is an obstacle to everything he wants to be doing:  Playing.

How this came from my body, I have no idea.  The whole family is scratching their heads on this one.

Last weekend we went to Hershey for our annual Holiday Dinner and Musical at the Hershey Lodge.  We enjoyed the show, went to bed in the incredibly clean and cozy beds there, and then the next day, ran off to the park itself.

We were hoping he’d come close enough to attain it.  We were so sure he would not have to wait yet another season.

The moment we’d all been waiting for had come.  He took a breath.  Straightened his thin shoulders, puffed his hair up as high as it would go, and walked over to the measuring board:

SO Close!  SO STINKING CLOSE!!!

He took it in stride.  This boy who suffers daily in school at the hands of other 9 and 10-year-old, much larger, boys.  This boy who, though smart as a whip, funny as a clown, energetic as the Tasmanian Devil, and creative as Gallagher…this boy who constantly faces the derision of his peers for his diminutive stature.

As a mother, I want nothing more but for him to be happy, no matter WHAT his appearance.  But I know how the culture of growing boys in school is, and I know he suffers the brunt of it.  It’s made him Scrappy as all get out…which will probably serve him well in life, considering he has inherited his mother’s habit of blurting out exactly what is on her mind.

And all he wanted to do this day was be able to claim the title of “Twizzler.”

One day you will attain it.  If I have to break into Hershey and repaint that measuring board, as God as my witness, you WILL attain it.

If you need me, I’m off to the grocery store to buy more cheese, whole milk, and candy bars.  Operation Twizzler is still in effect.