~ You Find The Damnedest Things ~

Yesterday’s surgery went off like clockwork.  My knee, it seems, did not have a torn ACL, just like Dr. Raffo surmised.  But, niether was the main issue arthritis, though there was some of that in there.

In fact, none of us were ready for what we found to be the major cause of pain.

At first, it appeared on the arthroscope as a piece of disconnected cartilage.  Cartilage  that had been swimming around my knee, causing immense pain and swelling: 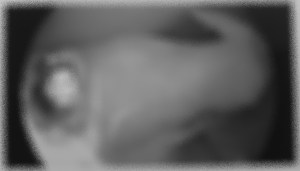 That big white chunky thing? Yep, that is what we THOUGHT was the piece of disconnected cartilage.

But when Dr. Raffo adjusted the zoom and aperture for the arthroscope, he found something entirely different.  Something so crazy, we were all surprised and dismayed:

That’s right….it wasn’t a piece of cartilage.  It was a Parasitic Twin! If you look carefully, you can see it actually looks just like me!  Crazy!  Complete with Sunglasses!

Of course, we were all aghast…and the Doc removed it post-haste.

Obviously, my knee feels much better, though it has a bit of healing to do yet.

All I can say is that hopefully someday our diagnostic tools will be able to catch these things earlier on.  It seemed like such a shame to remove the happy little bugger.  But out it had to come.  And thank God for medical science!!!

Thank you so much Doctor Raffo and staff!

4 thoughts on “~ You Find The Damnedest Things ~”