Our dear friends, Mark and Alice, are moving.  Mark has just retired from a long, adventurous, glory-filled career in the United States Coast Guard.  I won’t tell you his exact rank when he retired, but I will tell you that he wore the ‘Big Hat’.  He made a lot of decisions.  Some he was loved for, some…not so much.  But the point was that he had the courage to make them.  He’s done everything from fighting drug runners on the high seas, to saving cuban refugees from certain drowning.  He did it all for his love of country and family.

And now, he has earned his time to rest.

Alice is a woman of MANY talents.  Not only did she birth two ginormous sons who are now in the Coast Guard and Air Force, respectively, not only did she put up with being moved all over the country because of Mark’s Coast Guard career, but she is also as smart as a whip, a mean scuba-diver, a textile artist (she has woven me some beautiful scarves over the years), and organizer extraordinaire!  Add to that her remarkable natural blonde beauty, and I have to really TRY not to hate her.

I love this picture of them.  We took it when we went out for a final dinner together before they move to Louisiana.  (Where is that, you ask?  I have no idea.  I THINK it is somewhere north of Mexico.)

It’s a terrific photo of them.  I’m particularly proud of it, because to GET to this photo, I had to put up with this: 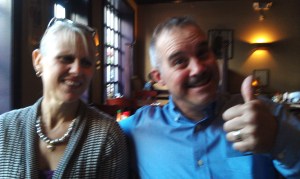 It wasn’t just the four of us (Mark, Alice, My Captain and Me) at dinner.  We also had our dear friends Joe and Eleny with us.  You might remember Eleny from the previous post: ~ Recruits ~.  Eleny and Joe are the proud, tired, wupped parents of 2-year-old twins.

And Mark and Joe are cousins. 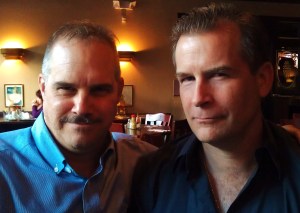 Joe is a Captain in the Navy.  He went to the United States Naval Academy with one of my brothers, and that is how I met him. 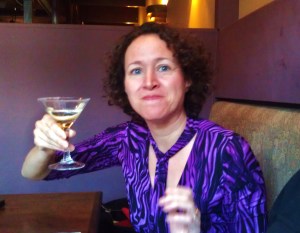 And, of course, his beautiful wife, Eleny, who is not only the mother of Zach and Vincent, but also is a Medical Doctor.

Who is beautiful to boot.  Brains, beauty…and a delicious lemon drop martini.  Joe never had it so good!

I know Eleny  from college…and you know who put her and Joe together???   You guessed it.  MOI.  I’m like a little Scottish/Italian “Yente”.  (of course, I used the word ‘little’ with some creative license….)

So picture this table: Mark and Joe are Military…both leaders.  Alice is the strong back-boned organizer and drill sergeant of their constantly moving household. My Captain is in the Fire Rescue Service, Urban Search And Rescue Special Ops unit, and is also a leader.  Eleny is a scarily-intelligent Medical Doctor and mother of twins…also a leader.  And then… there is me.

I love these people.  I really do.  They are movers and shakers, driven, leaders, honorable, heroic, humble, everything I am not.  Really, if anything, they need me to be their foil.

Just look at this handsome couple.

I swear, you have to watch these people EVERY minute.

We had a wonderful, bittersweet dinner, laughing while the men told stories about their adventures in the Coast Guard, the Navy, and the Fire Service, and the women mocked them lovingly.  We knew it would be the last such dinner for a long long time, if not forever.

Mark and Alice leave this weekend to this strange and unknown territory known as “Louisiana.”  We have no idea what new fate awaits them.  But we will think of them, and miss them and love them anyways.