We took Varmint and Critter to Hershey Park last weekend because:

1) We are the BEST parents in the whole world.

3) Apparently we have no idea what “Save your money” means.

4) Because we like to eat foods that are unnatural colors.

My friends, I give you exhibit A:

Does that stop my children from taking a moment to honor our country?  Heck no. 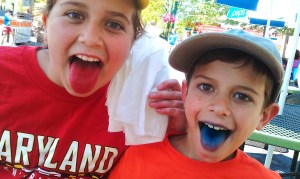 Brings a tear to my eye, really.

Ok, so, true story…..I planned this trip to Hershey Park on that particular weekend because they have a brand spankin’ new rollercoaster, called ‘Skyrush’,  that is the mother of all rollercoasters (at least, at HERSHEY) and I wanted my kids to get a chance to ride it before the hordes came when school was out next month.

I made them get up early on a Sunday (blasphemy), I made them sit in the car for 2.5 hours.  I made My Captain pay the crazy expensive entrance fee to Hershey.

Only to find out that the ride does not open until after Memorial Day.

Attention to details…apparently not my strong suit.

But it’s ok!  Varmint and Critter had other kiddie rides to distract them, in addition to the painfully-colored, chemically-created foods. 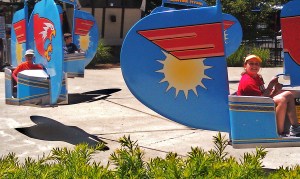 It looks sedate in this picture, but this was the only time it was still enough to get a shot.  The rest of the time it spun around violently, and flung their little ‘plane’s up and down and all around.