I stepped outside onto the back deck yesterday, and look at what my eyes beheld:

That’s Top Soil and Compost from Beallsville Valley Farm.  And THAT, my friends, is the last layer of dirt this project gets.  The end is near! (eek!)

I wonder what he is thinking. You know what he would say if I asked him?  He’d say, “Nothing.”  It’s amazing how often he is thinking nothing for such a thinking kind of guy.

After he got the compost on the slope where the flower bed will be, he raked and tamped it down.  Had my Critter not been on Spring Break with his father, he would have enjoyed the tamping.  He’s the best tamper, EVER.

And see where the gravel is?  That will eventually be half-patio, half-grass.

….I think.  At least, that is the plan.  And plans are subject to change…. 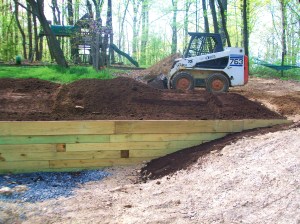 Can you see the difference between the under soil and the compost/top soil we are putting on top?  Wow.  Organic Matter galore!  (That’s a gardener’s way of saying ‘poop.’)

I cannot wait to get started!!!  I’ve got dreams of Ivy and Clematis and Honeysuckle dancing in my head.  I also have nightmares of dandelions and crabgrass and wild strawberry vine.

Any way you slice it, though, you gotta admit the project lovingly known as “The Mud Pit” is finally coming to its intended goal.  I am impressed.  It’s a LOT of work.  And My Captain has put up with no small amount of, er, whining from me.  I’m not proud of it.  But in my defense, I don’t have the ability of ‘Vision’ for great things the way he does.  I’m just lucky to get my pants on properly every morning.

We all live life at our own level, I suppose.