A couple of years ago a young man came into the fire station where My Captain works, and asked what he could do for the men there as part of an Eagle Scout project.  I am not exactly sure how they came to the decision, but it was determined that a good project for the aspiring Eagle Scout would be to build some stairs for the men.

You see, the station sits on the lower end of an incline, and the shops the crew often go to during a shift are up-hill.  For decades they had taken a path that had been naturally created from literally hundreds of boots going up and down it.  It was pretty muddy and very slippery in inclement weather.  Stairs would solve this problem.

So the boy took a year to plan, earn money for, organize a team, and build this:

Look at that.  That young man even built a hand rail.  And each step was filled with water draining gravel. It was a monstrous job.  But to become the prestigious rank of Eagle Scout, it’s got to be an impressive project.  They don’t just hand those badges out willy-nilly.  (Eagle Scouts never use the term willy-nilly.) 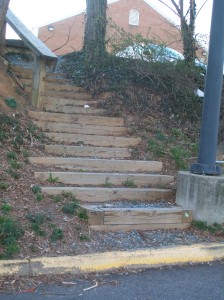 SO much work had to go into that project.  Hundreds of hours.  Sweat, blood, and sacrifice.  That young man could have been out with his friends, or dating a girl, or heck, even just sleeping instead of working on everything that this project entailed.  But he chose instead to give his time for the benefit of others.

How proud his parents must have been.  What a success story of parenting!  And how noble an endeavor.  This boy built these steps so these firefighters could….

….wait…what is up there again?  Why did they want the steps built?

OH YEAH, there is a Dunkin Doughnuts, a McDonald’s, and a Wendy’s on the top of that hill.

……eat junk food without getting their shoes dirty.

I shudder to think of the sleep and girl-time this kid lost for that purpose.  I sure do hope that Eagle Scout rank gets him somewhere good…he certainly earned it.

At the very least, I hope it helps him get a date.