Obviously, I need to start seeking reimbursement for hocking Alexander’s wares, but I can’t help myself. 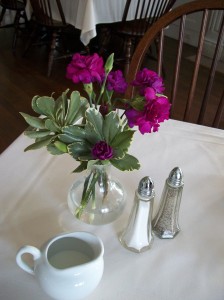 We sat down to unbelievably smooth coffee, ‘on the house’ home-made cinnamon rolls, and leisurely perused the menu. The atmosphere was relaxing, the rooms very simply decorated, the wait staff pleasant and easy-going.  I LOVE starting out my Sundays like that….second to sleeping until Noon, that is.

Are you ready to be teased?

Right out of the starting gate, we took on the Crispy Pork Boudin Balls, made with shredded pork, rice, and herbs all rolled together in a love session of I don’t know what, and then coated and fried, and served with Tomato-Grain Mustard Sauce.  Holy Stinkin Moly, these were good.

For the main course, I ordered the Steak & Eggs: with pan-fried sirloin steak and a red-eye gravy that had chunks of bacon that sent me to the moon.   And this protein packed start to the day was accompanied with Southern Greens, and the Black-Eyed Pea Tomato Salad. Oh Baby!  I ordered my eggs scrambled because I’m childish like that, but when I stacked steak, egg, and greens all on my fork all at once and put it tenderly on my tongue, it was heaven!  Rapture!  Angels Singing!  White Fluffy Clouds with little cherubs sitting naked on them.  (I take eating seriously, folks.)

Troy chose the Crispy Southern Fried Chicken Breast with Cheddar Waffles and Black Pepper Cane Syrup.  He gave me a bite and I nearly snatched his plate out from under him.  No, seriously.  I have very little self-discipline that way. But you know what I DIDN’T want off his plate?  The scrapple.  He chose Scrapple for a side.  And not just any scrapple…home-made right there on the premises.  That got him all a-dither, (he would tell you that men don’t get a-dither) but it most definitely did not get my tummy rumbling.  For all you scrapple lovers, go and try it at Alexanders; for the rest of you sane folk, choose the fried green tomatoes instead!

Finally, we were ready to try Chef Chris’ sweet-tooth deserts… but check it out…. last night (Saturday) he was inundated to the point where the crowds cleaned him out of sweet treats!  All he had left was one lonely piece of Banana Cake, and a piece of Peanut Butter Pie.  I suggested we stack the two and make beautiful music together, but I what I really wanted was chocolate.  You know me, I wasn’t quiet about my unhappiness.  But Chef Chris wasn’t worried….he knew I’d be back.

Some of you have messaged me and asked what I DON’T like about Alexanders.  I get that realistically, you have to see the good and the bad.  In this case, I don’t see bad, but I see things I would change.

Firstly, I’d put a designated smoking area on the side porch of the building.  For some reason the patrons who have gone outside to smoke have done so right smack dab in front of the front door 2 out of 3 times we’ve gone there.  We had to walk the gauntlet of cigarette smoke just to get inside the restaurant.  I hate that.  I don’t necessarily see it as a ding against the Restaurant, and certainly not the food, but it does affect the over-all experience, and I do see it as something they could address if they chose to.

Secondly, the bathrooms are quite clean and tidy, but they do need to be updated.  It certainly won’t stop me from patronizing them, though.  Heck, if I thought about it long enough, I’d admit that my own bathrooms could use some updating.  But I don’t want to put that much effort into thinking about it.

And thirdly, and this is the MOST egregious…they took the Fried Catfish off of the menu.  WHAT?!  It’s a southern cooking restaurant.  Ya Gotsta Have Catfish! They used to have it, and apparently served it up the right way…in a cornmeal crust and with chow-chow tartar sauce, but someone somewhere decided to yank it from the menu.  There is no justice in this world!  I’m going to keep complaining about it until either they put it back on the menu, or they throw me out.  I don’t really want to speculate as to which one is more likely to happen.

You want to know what offsets all three of those minor infractions?  Take a look at this: 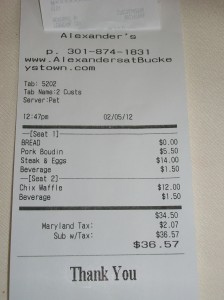