Both of my babies play basketball.  They really enjoy the game.  And both of them are on teams with terrific kids and have Over The Top Fantastic coaches.  We’re not done with the season, but unfortunately so far, it’s been a real humdinger for losses.  This past Saturday was no exception.

It kills me to watch them play their little hearts out and lose anyways.  I want so badly for them to win…I love every kid on each of  their teams.  I see them struggling and making mistakes and learning from them.  And learning teamwork.  And being part of something bigger than just themselves.   I’m so proud of them…all of them! 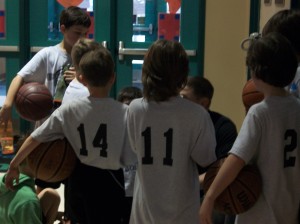 And Varmint’s team: (She’s on the left…with the pink basketball.)

Their coaches really are wonderful (read: PATIENT…as in herding cats patient.). They understand and teach that its more important to learn to be good sports, to learn to be good people on and off the court, than it is to win.   But while they get that winning isn’t everything, they also are doing their best to help their kids win! They are putting in an enormous amount of time and effort for these munchkins.  Our losses certainly have not been from their lack of trying!

We’ve just not had a great season so far, for either team this year.  It happens. The good news is that, more than anything, these disappointments are character building.  That has true value to it.

Yet, when I see the kids’ showing fatigue and defeat, 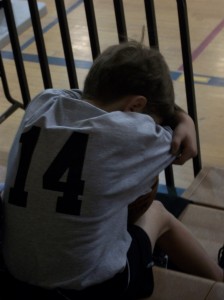 I just want to snatch them up and hold them close and protect them from any and all disappointment.  I’m not allowed to do that because 1) they would hate me for it and 2) I’d bust a gut….again.

I think about their peers.  Believe it or not, out of all of their friends, I enjoy the company most of the ones who have seen hardship and challenge.  The underdogs.  The ones who you just HAVE to root for as a mother and nurturer.  It gives them color, depth, facets that an easy life simply couldn’t.

There is something to be said for loss.  For character building.  For defeat.  No matter what your age or circumstance.  And the more they experience that now, the better prepared they will be to deal with it later on in life.

Somehow, though, I don’t think my babies would agree with me.

Motherhood is a real kick in the pants sometimes.