~ Goggy And Papa Are Leaving ~

My Captain’s parents, lovingly known as Goggy and Papa, are moving away to North Carolina.  They’ve lived here on Peach Tree Road for over forty years, just four doors down from The Little Cottage.   My Captain grew up in the house that they are selling.  In  a couple of months, he will have to pass his childhood home nearly every day, and know that their comforting presence is not there.  He insists that he is fine; and I’m sure he is, being a big boy and all.

Still, if we could have swung buying that house, we would have.  But for now at least, The Little Cottage is our home.   And to be honest, even though Critter and Varmint often lament how tightly we are packed here, they would not leave this little Sears Craftsman house for all the tea in China.

My Captain, feeling more than a little bit sentimental, took Critter out for a lap around Goggy and Papa’s acres last week.   It was a cold and snowy day, and Papa’s little red Gator had to traverse some nasty ice.

Of course, it was beautiful, as it always has been.  My Captain never takes it for granted, even though he has been here since he was so little.

Critter could not fathom what it is like for My Captain, who has always been so close to his parents, to suddenly not have them just four houses away.  It’s hard for Critter to imagine not having his parents at his beck and call. 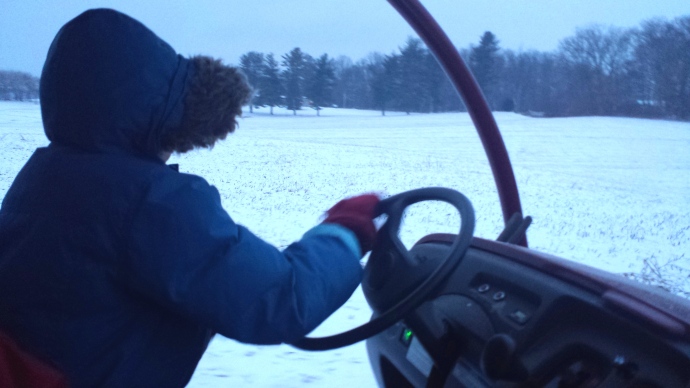 “It’s a little different,” explained My Captain.  “I’ve had nearly fifty years with them.  I’m ready to strike out on my own,” he chuckled.

“How would you know?” challenged a boy far wiser than his 12 years.

It bothered him.  Critter didn’t like to think about such a time ever happening in his own life.  A time when his ‘safety net’ was not immediately under him.

And he seriously doubted if My Captain had any real understanding of what was about to happen.

“I’ll be okay,” My Captain reassured him, and winked.  “I’ll still have your mom, Varmint, and you with me.”

“Won’t be the same.” Critter shook his head.

“No.  And that’s okay,” My Captain reached over and corrected Critter’s steering wheel. “You don’t always want me holding on to your steering wheel, do you?”

“I guess we’ll know the answer to that if we get stuck in the snow,” mumbled my little pessimist.

What Critter has yet to understand is that Goggy and Papa leaving is in some ways a good thing….because they will be entering a new and exciting time in their lives, because change is healthy for all of us….

…and because you can’t learn how to steer on your own without getting stuck in the snow every now and again.

One thought on “~ Goggy And Papa Are Leaving ~”