Yes, we are a family who swims deep into the Campy, the Corny, and the Cliché.  But, like any other family, we have our traditions that are completely unique to our little circle of love.  I’ll admit, from the outside, they might actually seem to run past ‘unique,’ and land somewhere in the realm of WEIRD.  I’ll grant you that.  But anything you want to call singularly your OWN must be different from the rest of the herd, right?

Christmas Eve.  Most people are doing their Christmas Eve-y things.  Roasting Chestnuts.  Watching The Polar Express.  Singing Christmas Carols.  Icing Christmas Cookies and putting them out for Santa. Going to church. Having large family dinners that include that one weird Uncle who always wears the Hawaiian Shirt, and spills gravy on one of the Grass-skirted hula dancers’ boobs…you know, the usual.  These are all perfectly wonderful American Christmas traditions and I love each and every one of them.

But Critter, Varmint, and My Captain have another, less socially accepted Christmas Eve tradition.

Critter begs for the Smackdown.  He cajoles his sister into joining the begging.  My Captain says ‘no’ about a dozen times, knowing full well that the evening WILL end in a total family wrestling match.  A wrestling match that won’t stop until someone starts crying, or a cat goes flying. 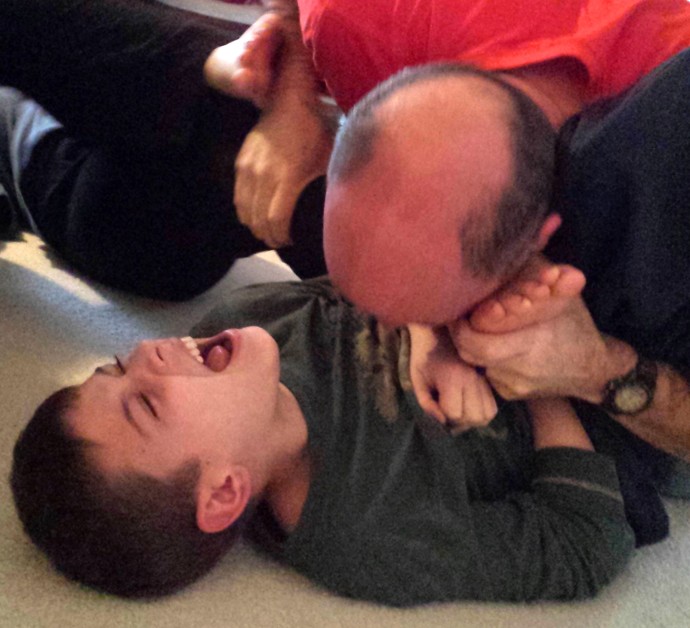 Most of the time it is the kids vs. My Captain, but sometimes I get in the fray, just to mix it up.  I did it more often before the kids had gotten so rough.  Now I’m content to watch, take pictures, and move any family heirlooms out of the way. 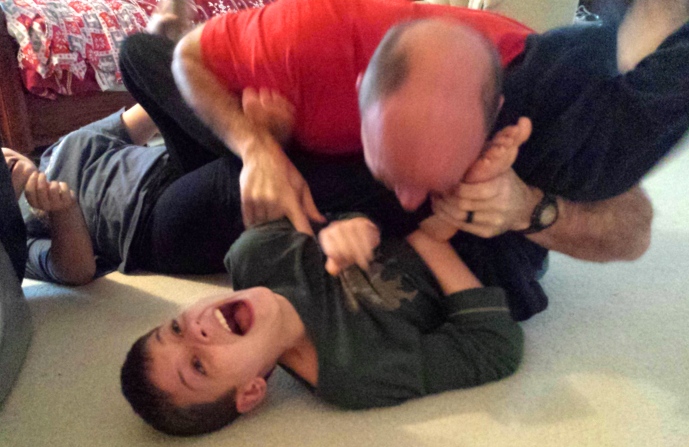 For Critter and Varmint, the goal of each match is to get to My Captain’s head, in order to put a full fledged raspberry on it, slobber and all.  The goal for My Captain is to not only prevent this from happening, but also to tickle Critter’s sides until he looks like he might puke, and to tickle Varmint’s ultra-sensitive tootsies until she nearly pees herself.

Critter and Varmint, in all of these years, have NEVER won one of these matches.

You have to wonder WHY they keep coming back for it!

But they will again.  Time after time, after time.

I suppose there will come a day when they are too great for My Captain, and he will end up getting his pate good and slobbery.   And I suspect he won’t want to wrestle anymore after that.  Maybe the brats know this.  Maybe they could have won years ago, but they don’t, because they never want this to end.

I wouldn’t put it past them.