Many years ago, My Captain and I were inspired to ride the 10 miles (20, round-trip) from Confluence, Pennsylvania, to Ohiopyle, at the falls of the beautiful, whitewater Youghigheny River.

Our romance was fairly young.  We were both willing to go the extra mile to impress each other.  It was still the days when we wouldn’t fart in front around one another, or pick our teeth at the table, or wear the same socks three days straight.  We were both intent on woo-ing!

The day was beautiful, and riding our bikes along the cool, sweet river water was pure heaven.

The first half of the ride went off without a hitch.  It is a slightly downhill grade to Ohiopyle, and we enjoyed a leisurely pace.  Stopped at the Hershey Ice Cream store in town, held hands, walked to the bridge near the falls, enjoying the sunshine and each other’s undivided attention.

When it was time to get back on the bikes, we both admitted to being slightly tired, and would be glad to get a shower at the River’s Edge Bed and Breakfast, and then gorge on their fantastic food.   It was a good plan, and all was right with the world….

Until the second mile back.

One of My Captain’s pedals broke.  We had at least 8 miles, uphill, still go.  What were we going to do?  Were we going to walk 8 miles?  We were already kind of tired!

My Captain got to work.  A little chewing gum, dental floss, and C4 later…..

It wasn’t pretty, but it was an interesting tow-job.  He had taken the wires for the bike locks, and created a pull line.

Being a proud manly-man, he was determined to be the one to tow, so I got put on the broken bike, where I had nothing to do but coast and enjoy the view.  Within a couple of miles, he could feel every single one of the extra pounds on my thighs and butt.  Hell, he probably could even feel the weight of my extra chins.

I started singing by the fourth mile.   He glanced back to see me with my feet on the handle bars, and my hands behind my head, lounging.  He didn’t appreciate it.

And by the time we arrived in Confluence, he was totally, thoroughly, and in all other ways devoid of romance.  He was DONE. 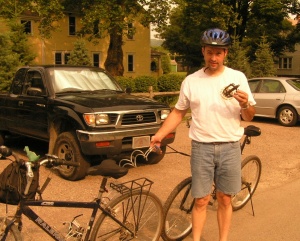 I took this picture of him back at the bed and breakfast.  This is him holding the broken pedal.

He was not pleased.

But what he didn’t know then, and I hope he knows now, is that his on-the-spot, adapt-and-overcome-fix-it job impressed me more than any easy ride up the river ever could have.

We haven’t done that ride since, though I’d really like to.  I think My Captain has flashbacks whenever I bring it up.  I’ve gained weight since then, and I don’t think he has the heart to pull me ten miles up the river anymore.

He picks his teeth at the table now, too.

I can’t judge him too harshly, though, because I fart at it.