It started with the 2 feet of snow we received over the last 24 hours.  Varmint and Critter, itching to get away from the chores I kept thinking up,  willingly ran out to build a snowman.  But not just any snowman.  The MOTHER of all snowmen.  Which, technically would make it a snowwoman, but let’s not digress. 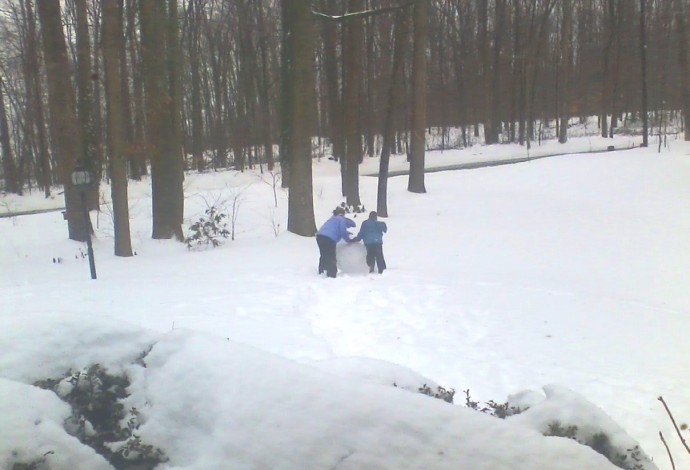 The first snowball, the base of the MOTHER OF ALL SNOWMEN, got pretty big.   It was 3′ in diameter until it accidentally rolled down the hill and landed in the middle of the driveway.  By then it was about 4′ in diameter.  And there it stayed.  It would not budge. My Captain will be so pleased when he comes home from his 48 hour shift at the firestation to find his truck’s path is blocked.

I went out, in all my Total-Knee-Replacement-Recuperation glory, desperately trying not to fall, and gave it a try, myself.  It wouldn’t move.  So I did what anyone else would do.

I said ‘Screw it’ and started looking for sticks for arms.  If My Captain didn’t want a 2-ton snow ball in the middle of his driveway, he should have stayed home.  It’s not complicated. 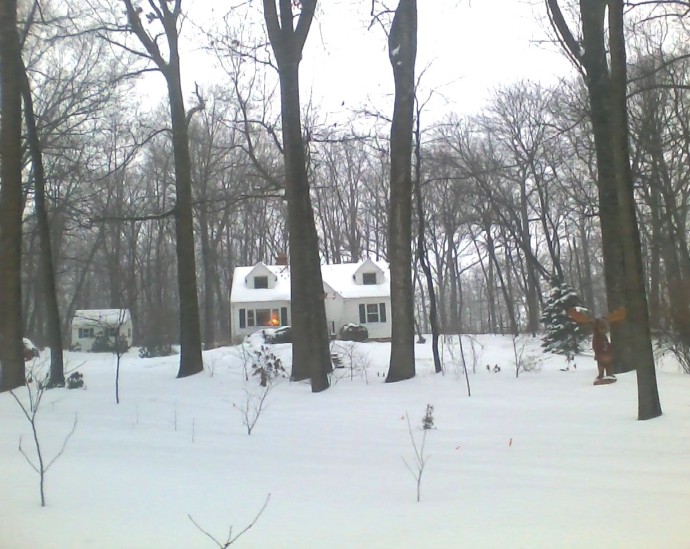 It had started to snow again, and it was so pretty that I tried to walk to the street.  The snow was beyond my knees.  I may not have been able to go to Physical Therapy today, but believe me, I had physical therapy in that short jaunt to the road.

The Little Cottage in the Woods was so beautiful and quiet.  I stood in the middle of the road just listening to the wind and the snow and an occasional bird. 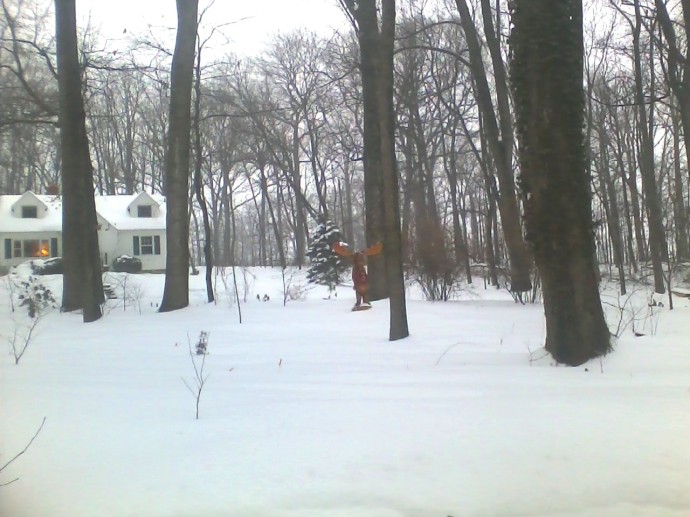 I noticed Maxwell the Moose’s Valentine was still firmly in place. He didn’t seem to mind the cold! 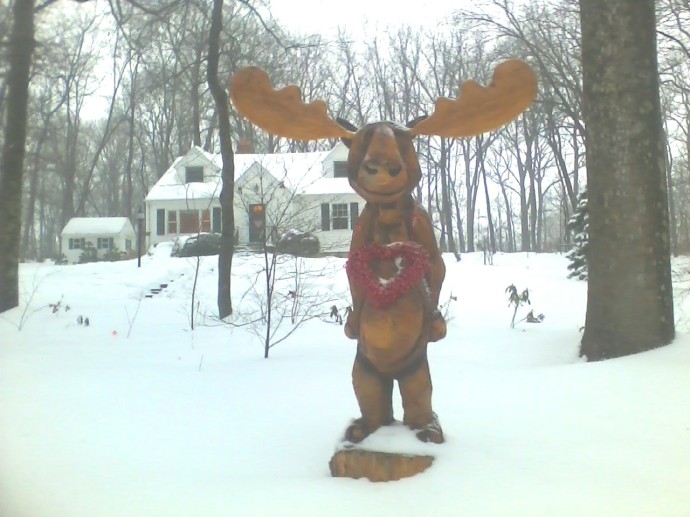 I just love how he’s so dang happy.  He just sends good vibes to everyone at any time of year.

I was at such peace with the world in the moment.  I thought about how happy we all were, safe, warm, and snug in the Little Cottage in the Woods.

And then I thought of My Captain…..

….at work at the Firestation since last night.  His normal shift did not start until this morning, but he went in last night as a favor to anyone who wanted to go home early, and save them from driving in seriously dangerous road conditions.

While we’d been making snowballs the size of VW Bugs, he had been ready for snowstorm-related calls all day.  Finger amputations (Never.  Never, Never, Never, NEVER stick your hand in a snow blower to clear it out, people!), and other EMS calls would be well attended by his crew.   The storm didn’t stop them.  It can’t.  All it meant is that firefighters must shovel out parking lots to get to their patients, and other people in need.

In this shot there are at least six firefighters.  One is shoveling; one is driving; and four are responding to the EMS call (not everyone is pictured).

I thought about The Little Cottage in the Woods again, and the MOTHER OF ALL SNOWMEN in the middle of the driveway, and I thought, “You know, if we have any kind of emergency, that might be an issue.”

We are so screwed.