Understand that My Captain ALWAYS wins.  At every game.  Against anyone who plays him.  All. The. Stinkin’. Time.  He always wins.  Critter and Varmint and I just take it for granted that in all the board and card games we play with him, he doesn’t really count, because it’s a given that he’ll win.  There is no challenge in it for any of us.  The outcome has always been irritatingly inevitable.

My knee replacement.  I’ve been a lot more sedentary and had a lot more free time over the past several weeks, between the hospital and my recovery here at home.  I’m alone much of that time, with My Captain back at work at the fire station and my children in school.  And for the first few weeks I could not navigate the stairs well, and was discouraged from trying it when I was at home alone.   So the Kindle has been my constant companion.

And on the Kindle is every kind of card game you might imagine.  My favorite hands down is Rummy.  I’ve gotten so good at it that I’ve beaten the most advanced player the Kindle’s App has to offer-more times than not.

And two nights ago I invited My Captain to join me on the bed for a game of Rummy with real cards.  I wanted a real live game, with real live company!!!  He wiggled his eyebrows with a, “Do you mean Rummy, or RUMMY? Heh, heh, heh….”

I flashed him my disgusting knee and swollen, contused leg, and said, “Cool your jets, Romeo, I’m talking cards.”

We played, but I suggested instead of keeping score, we just play for winning hands, and the winner of each hand could actually win something.  He chuckled, imagining he would be sweeping the spoils as usual, and consented.

The first hand I won the prize of having him clean the cat box the next day.

The second hand I won him doing the dishes the next day.

The fifth hand I won a Sonnet, to be written in my honor.

The sixth hand I won a compliment, which he gave me right there between clenched teeth, “You’re a really good Rummy player.”

On the seventh hand we were arguing about what the prize could be before we played it, and I suggested the loser could pen a Haiku in the other person’s honor.

In his proudest, manliest, most condescending tone he growled, “I. Don’t. Do. Haikus.”

I batted my eyelashes at him and said soothingly, “Maybe you’ll win this hand.”

Friends, I can’t wait to see what he comes up with.  It ought to be one DOOOZIE of a Haiku. 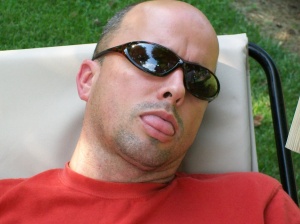