After we acted as Human Tampers for My Captain this weekend, he decided to reward us with a creek hike.

To an arthritic, overweight, sloth-like Mama, there is questionable validity in the term ‘reward.’

We aren’t all made the same, is what I’m saying.

But I love my munchkins, and I could tell they were in need of a change of venue, so I dutifully came along. 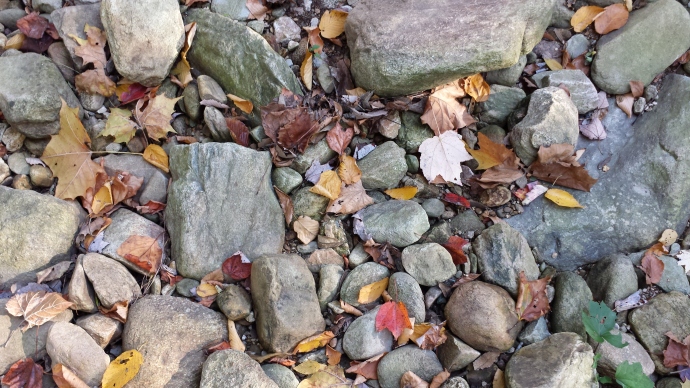 At first we found great beauty and reveled in the excitement of adventure.

But it was about the time we entered the creek I realized that My Captain had not brought along the necessary gear…..He didn’t have his muck boots.

What did this mean? It meant My Captain would be the official Camera-Man.  It also meant that Mama would be the one in the drink with the kids.

This was fine for a while…..

And then Critter’s boots started rubbing his shins raw….

So I carried him barefoot to the flat path parallel to the creek.

It is a good thing my arthritic, loping, ga-lumphing limp, and several wind-milling-armed near-misses did not translate to film.

But even if they had….there is no way on God’s green earth I would have posted them!

I have SOME self-respect, after all.

If you haven’t gone fall-creeking with your kids….do it today.  It’s worth every blooming near-miss, every galumphing gait,