My Captain had his 48th Birthday yesterday.  We had a small dinner party for him at Goggy and Papa’s house, and Goggy made My Captain’s favorite childhood dish, then dubbed and forevermore thusly known as:   “Chicken in the Black Pot.”

And I made a cake!  A Chocolate Éclair Cake!

And I made it sugar-free!  I substituted Xylitol for every instance it called for sugar.

It didn’t taste half bad.

But the candles were the part I wanted to share with you.  I got the dorky re-lighting kind.  I love to do stuff like that.  Call me Mephistopheles.

But dagnabbit!  That man knew right away what kind of candles they were just by the way they were burning and sparking.  He didn’t even TRY to blow out the candles. He just started snuffing them out with his fingers.

He thought he was foiling my plot!  But ha-ha!  Not so fast, there Skippy! 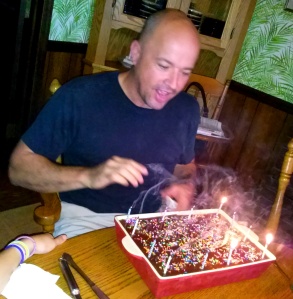 It ain’t so easy, there Bucko!

That smile on My Captain’s face?  It’s more valuable to me than chocolate.

And THAT is saying something.

Grandma Jane got My Captain something as well…… 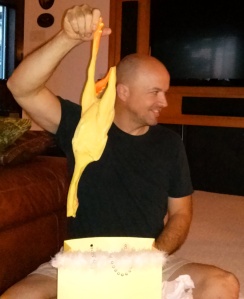 And So It Continues!  THE FAMILY RUBBER CHICKEN.

(It gets re-gifted everywhere)

What?  Doesn’t everyone have one?