The outside shower at Pop-Pop’s cottage at the beach is a rustic, sometimes scary place to lather your sandy self off.  Since I was a kid, I learned to take the world’s fastest shower in it, as I’m opposed to dodging flies and mosquitos, and heaven forbid, the occasional spider.  It’s not a place I would choose to linger as a child OR as an adult.

But this week a teenager showed me a different perspective.

His name is Freddie, and I believe he will go far in life.  You see, Freddie was out in the shower, washing sea salt and sand off of his sunburned body, when he remarked to his mother, who was passing by the stall, that his life is now complete.  Not only did he get to enjoy a shower outdoors, which apparently is every man’s delight, but he also got to do it bathed in the strong scent of bacon.

I was in the kitchen, which is on the other side of the cottage wall of the shower, cooking this appetizer for our dinner:

Jalapeno peppers stuffed with a mixture of cream cheese and New York sharp cheddar cheese, and wrapped in Bacon.   And since it was so close to the 4th of July, I used flag picks instead of run of the mill party picks. 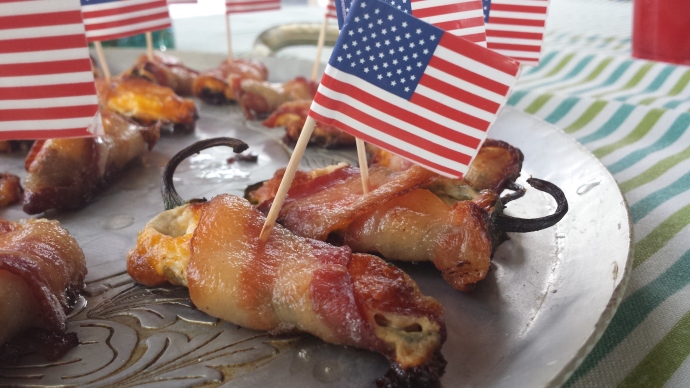 Apparently I’m a genius.  And not just a genius, but a patriotic one at that.  Who knew?

Anyways, the fan/vent to the oven is adjacent to the outdoor shower, and it blows a strong draft right over the shower.

If you’re cooking something like fish, it’s not a pleasant experience.  But if you are cooking bacon……

I suspect that the only thing that might make the experience better for a man would be for the shower water to taste like beer.

Once again, a member of the younger generation has shown me another way to appreciate my own life.    I am thankful for it!

Well, thankful for that, and bacon in the shower.