I’ve always been a best foot forward kind of gal.   Always believed that the ones that strive the hardest, put forth the most effort, will reap the most benefit, have the most glory.

But in my 45 years on this earth, I’ve learned that sometimes it’s just plain dumb luck that makes success.  Twists of fate.  Wrinkles in destiny.  That kind of esoteric crap.

It was Halloween time.  We were going to a church shin-dig where people decorated the trunks of their cars to a theme, and parked them all in parking lots, and the kids could ‘trunk or treat’ their way through the lot in pure, well-watched safety.   The people who participated in this thing always went all out…. I mean there were some fantastic cars and costumes.  Really awesome efforts.

Well, I don’t remember why we didn’t, but Neither My Captain nor I had the energy to decorate a car, nor had we put much thought into what our costumes would be.  The night before Trunk or Treat arrived, and we found ourselves scrambling for some kind of costume that would not require purchasing anything.  Or for us to get off the couch, for that matter.

Eventually he booted me off the couch, and down into the basement I descended, hoping that somewhere among the cobwebs and roach-bait, I’d find epiphany.  It was there in the Rubbermaid Tub of Halloweens Past, that I exclaimed “Eureka!”

At first My Captain balked, and said there was no way on God’s green earth he was wearing it.

No problem.  I simply annoyed the snot out of him until he relented.  It’s how I get through life.

My genius idea?  My super-cheap, incredibly creative, and just alittle bit sassy idea?  Be eachother.  Sure, maybe it wasn’t an original idea, but it was all we had.

We did it up a couple of ways.  My Captain did me in a wig:

And I did My Captain in a conehead and makeup for an afternoon shadow.

I didn’t have a plain ‘bald’ cap, but no one questioned the conehead was supposed to be My Captain. 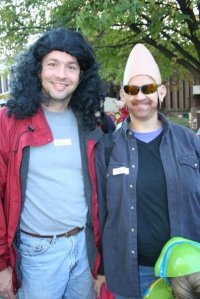 I think he was a little miffed about that.

All in all it was just a little bit (read: A LOT) weird, but the crowd liked it.

So now we do this every weekend, you know, just to mix it up a bit.