We went to Williamsburg, Virginia for Spring Break and I have so many cool stories to share with you! But tonight I wanted to tell you about the most romantic thing that happened to me there.

I was in the Colonial Jewelers, admiring the authentic period jewelry and came across this beautiful ring: 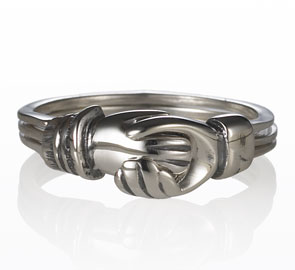 It is called a Gimmel Ring.  Centuries ago, they were betrothal rings.  Three separate rings hinged into one.  Initially separate, (one for the woman, one for her betrothed, and one for the maid of honor) they were to be joined at the marriage of the couple.  Beautifully wrought hands, a man’s and a woman’s, each on their own individual ring,  clasping each other tightly over a third ring which was simply a heart.  How sweet is that?  I can get dreadfully sappy, so bear with me here. 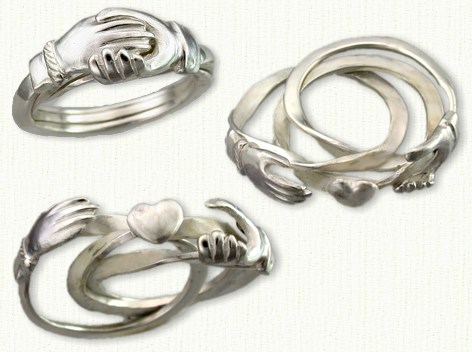 I showed My Captain this way cool ring and he looked about as unimpressed and as uninterested as any man could possibly look.  Let’s be frank, no self-respecting manly man firefighter would ooh and ahh over a romanticly designed ring.  Hell, he’d lose his Man-Card over something like that.

Way back when, My Captain designed my wedding ring.  He drew the design and we found a jeweler to create it and it is truly a one of a kind thing of beauty.  Yellow Gold Ivy leaves with different kinds of precious and semi-precious green jewels embedded in it.  Beautiful. 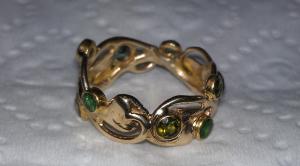 But some of the jewels fell out, and our Artisan Jeweller, a frenchman named Jacque Hemsi of Jewelry of Chardavogne , asked us to return it so he could rework it.  He takes tremendous pride in his work and it chaffed him that it happened.  He’s even replaced the stones at his own expense.  I love this guy!

But unfortunately that means I won’t have my ring for a couple of months.  I’ve felt naked without my wedding ring!  I felt DIRTY!

Well don’t you know that, despite his apparent casual dis-interest, My Captain bought me one of the pure silver Gimmel Rings right then and there, hand made by the artisans in Colonial Williamsburg?  He gave it to me so I wouldn’t feel so naked until my real wedding band returns. 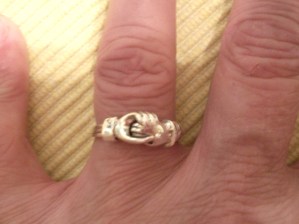 Is that not the most beautiful gesture ever?