While out on our property in Columbia Falls, Montana, Critter and My Captain came across this: 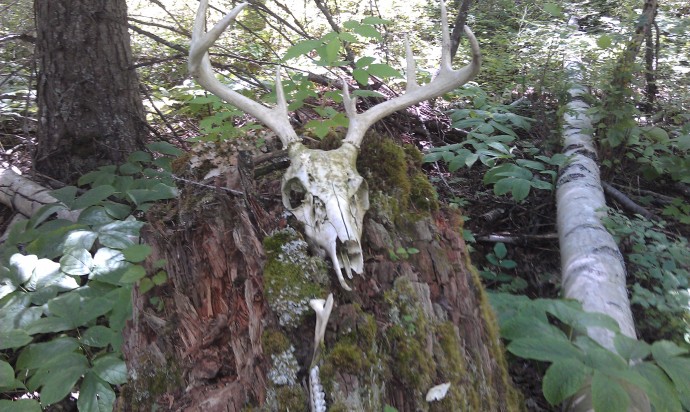 They were very excited and proud of their find…so much so that they were blinded to Varmint’s and my revulsion.  They not only brought it back to our campsite, they went to UPS, and spent $40.00 to carefully send that nasty thing home!

A week or so later, the good-natured, well-built, always-got-a-smile-on-his-face-not-that-I-would-notice UPS man delivered a big package to my door.  I’d forgotten about the buck skull and, silly me, was anticipating something fun like a purchase from Plow and Hearth or Lilian Vernon or maybe even The Oriental Trading Company!

And then I opened it, and my revulsion was renewed.

That is how I came to be holding this in my hand, leaning on the kitchen counter, wondering what wrong turn I’d taken on my road of life.

Critter has a passion and excitement for this thing….something about the wilderness, and mountain men, and testosterone-fueled ideas like that.  He wants to mount this thing on his bedroom wall!

“Well, for one thing, Mom, it will keep my sister out of my room.”

Couldn’t you just lock the door?

“And besides, just look at it!  The question is, ‘Why wouldn’t I want to mount it on my bedroom wall?'”

Ah.  Ok then.  How can I argue with such irrefutable logic?

I heaved a heavy sigh and made friends with several containers of these in the basement, 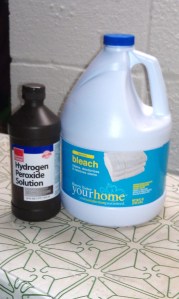 and proceeded to soak the living daylights out of this poor creature’s remains.

Maybe if I soak it completely for hours and hours on end, it will go away entirely….

And NEWS FLASH…after all of this:  after the men rejoiced in finding it, after they took great pains to ship it home carefully, after I soaked it in literally gallons of bleach and peroxide…

I discovered via google that one should NEVER soak bones in bleach because it breaks down the structure, rendering it to bone dust in short order.

Maybe that’s not a bad thing?  Maybe providence was stepping in here in my carcass-curing ignorance?  Maybe I’ll be spared the agony of looking at it when I’m in Critter’s room.

So what of the skull?  What happened?

My Captain wants me to paint it with glue and water to help preserve it, and then he’ll mount it on Critter’s wall.