The last hike we attempted while at Glacier National Park this summer with Critter and Varmint was our particularly favorite hike.  My Captain and I fall in love again every time we hike that trail.  Aptly named “The Highline Trail”, it is one of the highest trails in Glacier Park, with its trail head at the Continental Divide, and much of it on a cliff no wider than a sidewalk.

Which would, of course, beg the question, “Then why is your chubby bum on it?”

The answer to which is that I began hiking that trail long before my bum was chubby, and I refuse to stop.

Anyways, I didn’t warn them.

I needn’t have worried about Critter, but Varmint was visibly peeved to see we had to hold onto a guide cable that had been anchored to the cliff wall. 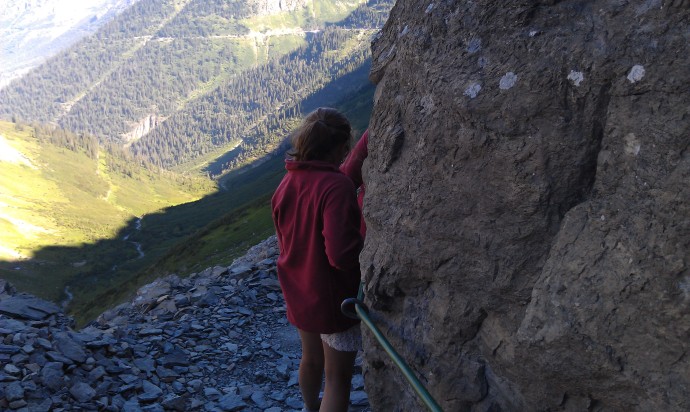 A guide wire that had been stuck through a rubber garden hose, because that is the kind of ingenuity our National Parks Service is known for.  That, and a shoe-string budget.  But hey, it worked.  And Varmint relaxed visibly when she witnessed my own girth securely held by the rubber hose. 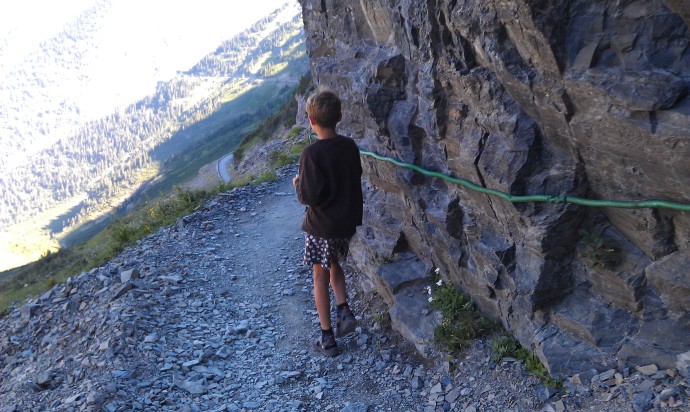 Do you see that road down there?  In the upper corner of this picture of Critter on the trail?  That road, The Going To The Sun Road, is a full 400 feet down from the rock wall/cliff we were walking on.  The cars, the people, all of them were like tiny little ants to us. 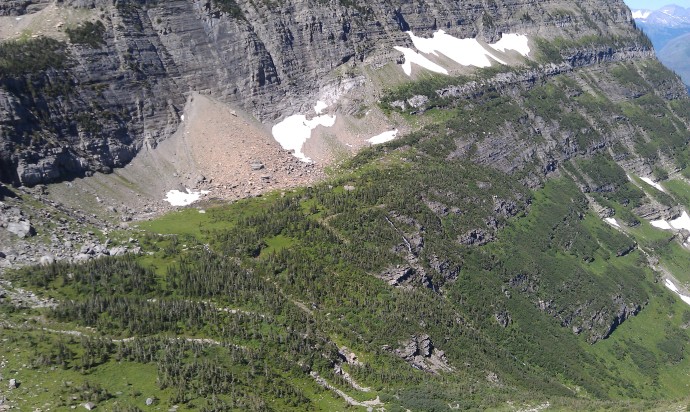 See those trees down there?  They are on average about 50 feet high.

See those patches of white down below us? Those are actually snow fields bigger than football fields.

Look, the point I am making is that we are seriously high up, we are dangling on a narrow little path, and you just need to be super impressed, ok?  Like the next time you see me, you need to tell me how amazing we are.  That is what my point is.

Though in the interest of full disclosure, we only hiked about 3 miles of the Highline, which in truth is about 11 miles.  My Captain and I have completed it before (and I lost toenails every time we did it), but we weren’t going to ask the kids to do that. 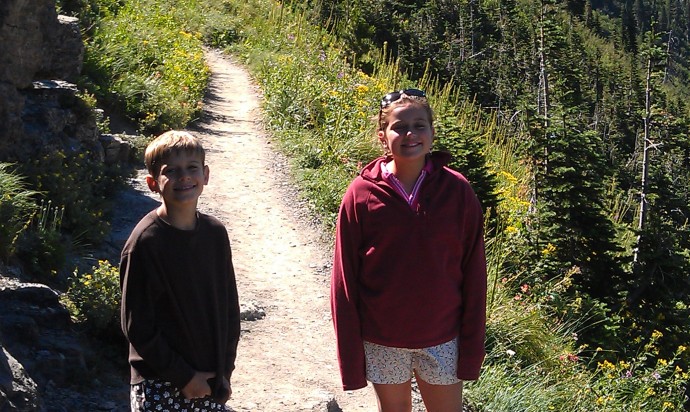 We didn’t ask them to do that for several reasons:

1) We want them to love hiking, not see it as a death march.

2) My arthritic knee would not handle the 11 miles of Highline.  Nuh-hun.  No-Siree.

3) Varmint had begun to cry.  That is usually a good clue that we might want to consider turning around.

4) I had begun a raging headache that was starting to make me nauseous.  And I’m not talking a little urp here and there, I’m talking the “keep my car window down and roll the window behind me UP” kind of nausea.  Don’t act like you don’t know what I’m talking about.  We’ve all experienced that particular kind of the-car-might-still-be-in-motion-but-I’m-going-to-lose-breakfast-anyways nausea.

“Are you SERIOUS with that chubby bum up here on this goat trail, lady?”

And you can see why this is our particularly favorite trail.  Death-defying ledges, Puking, Goat-Mockings…it has something to offer for everyone.

I think my kids will remember (read: have nightmares about) that trail for years to come.

One thought on “~ The Highline Trail ~”