We sat watching the Chickens, my munchkins and I, as they gobbled up the scraps we fed them this morning.  Tomorrow is our last day as Chicken-sitters, and we are actually pretty sad about it.

It was a beautiful morning; The sun was shining, but we were cool under the shade of the mature trees.  The chickens were clucking quietly, except for RFH (Rooster from Hell) who felt the need to CockleDoodleDo whenever the hens weren’t preening for him. 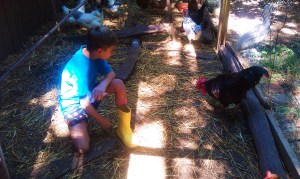 And my munchkins were getting philosophical.

“Mom? How big are chicken’s brains?”

“I don’t know, love, but judging from their heads, probably the size of a walnut or a large pea.”

“If your feeling especially mean, sure.”

“I wonder what they call us? In chicken language, I mean.”

At which point the RFH Cockledoodledoooed, with an expression on his face that told us whatever he is calling us is especially mean, too.

Varmint then shared with us that she doesn’t like us calling him the RFH.  It doesn’t sit well with her.  So we changed his name to something less insulting.  Not a lot, but a little less insulting: 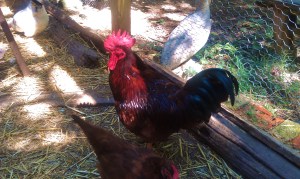 And we named one of the Hens “Einstein”, because she was the only one in the coop who figured out how to break into a cocoa-puff.  We were pretty darn impressed with her and praised her and encouraged the others to emulate her.

Yessir, we sure will miss the entertainment of Chicken-sitting.  We’ve gotten used to hanging out with those silly creatures every morning. We’ve come to love the philosophical questions their existence raise.

But between you and me, I don’t think the chickens give a damn.