My Critter got the cast off of his broken arm today.  It has only been four weeks, but that was four painfully long, like, snail-creeping long, weeks.   He was ready, READY to lose that thing.

Here he was with the x-ray techs at the doctor’s office: 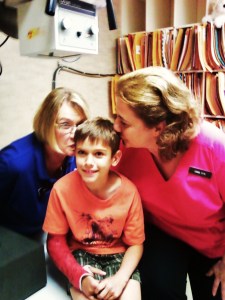 They loved him.  While cajoling him for the x-rays, they told him he was too cute, that his eyelashes were ‘to die for’, and that he had to be careful because if he kissed too many girls, his teeth would fall out.

Well, DUH.  Who doesn’t know that?

ANYWAYS….back to getting the cast off:

Sure, it was a beautiful bright red.

Sure, all the girls ‘oohed’ and ‘ahhed’ over it.

Sure, the boys vacillated between respect and envy.

Sure he’d been able to get out of several chores, although the need for that was questionable, at best.

But in the end, what he really wanted more than anything was to be able to swim and bathe and pick his nose or any other 9-year-old-boy-gross-out-the-girls thing.  And he wanted to straighten out his dagum arm!

He now has a new appreciation for how difficult it is to do some things without the dominant hand.  It is something we all take for granted, isn’t it?

Doubt me?  Try it sometime.  Try to pick your nose with your non-dominant hand.

It can’t be done.  Not without minor trauma.  And it’s not the kind of trauma that girls get excited over, I promise you.

So what did the boy who broke his arm 4 weeks ago while attempting to do a back flip say to the doctor when the cast came off?

“When can I do backflips again?”