Reminiscing about my youth, and some of the crazy stuff I did, some of my fondest memories come from the years I kayaked white water.  It took a long time for me to learn all the ins and outs of it, and by that I mean how to get in and out of the dagnab contraption…

We used to paddle in the springtime to catch the snowmelt, and the rushing rivers and creeks during that time.  We’d travel from Ohio up to the Slippery Rock River in Pennsylvania and do the “Miracle Mile” which was a fairly technical run, though not a large quantity of water.  It was a good place for a beginner, but still fun for the more seasoned.

And I learned more than paddling skills on it.  It was on the Slippery Rock that I learned how to pick out riverside pee spots.

As I said, it was early springtime, and the air and water were COLD.  We were all bundled up as best we could be to ward off hypothermia.  That meant layers, because we were all too poor to afford Dry Suits.  So picture Mama Boe in the following layers:

Bathing suit.  (a one piece because I’m shy like that…oh, and fat.)

Imagine all of these things wet, which makes them cling to your body as if they were hermetically sealed.

Now, imagine having to disrobe to pee.

Ever shivered your way out of a wetsuit?  It’s painful.  Trust me.

So everyone in my group was nice enough to find an Eddy (calmer water to pause from paddling in the moving water) and wait for me to do my business.  I popped open the sprayskirt of  my trusty Response (a good beginner boat at the time.  By today’s standards, it would be considered the ol’ stationwagon you grew up with) lifted my prodigious butt out of it, and slid up the rhododendron covered embankment adjacent to the river.

I did a little bit of scouting….not a lot because I knew my friends were patiently waiting for me, and I was cold as all get out… found what looked to be a fairly open enough spot that I could reasonably squat without getting a rhododendron stuck in a place I would rather it NOT be… and began the tedious task of disrobing.  Off came everything:  The helmet, the Life Jacket, the fleece, the wet suit I pulled off of one foot and left dangling on one ankle (I didn’t want to pee ON it) and then my bathing suit.

Why not just pull the crotch to the side?  I have no idea.  I just didn’t. Probably because I was suffering from acute hypothermia and wasn’t mentating well.  Today, I would just pull it to the side.  No, scratch that, today I would just pee in my wetsuit.

ANYWAYS, I was effectively butt-naked.  In the cold frosty early Pennsylvania springtime.  Imagine me squatting, naked, steam coming off of my rather impressively sized body, my breath coming out in cloudy puffs, and trying to relax enough to pee.

It took a while.

But eventually I could and did and as I started to release my pee, I heard the crack of a stick.  And then another and another.  I looked around, and to my horror, saw a family of five…mom, dad, and three young kids, walking towards me.

Apparently my pee spot was actually a hiking path.

(And you wondered why I am the way I am….it’s all coming together now, isn’t it?)

They turned abruptly and walked briskly away.

I have that effect on a lot of people. 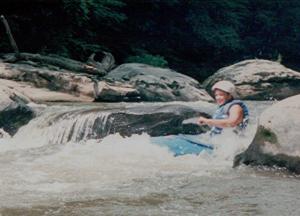