I’d always thought of a Hardware store as a man’s domain.  Guy Turf.  Call me sexist.

You can tell its male-ness by the barely audible primal grunting coming from men as they walk through the door.  You won’t hear that from a woman, unless maybe she is in gastrointestinal distress.  (Mind you, I don’t include Loews or Home Depot in the category of Hardware store.  Any place that sells Martha Stewart brand anything is most emphatically NOT a manly-man hardware store.)

As the wife of a manly man, I don’t have much occasion to go to a Hardware store.  Grocery stores now sell a much wider range of goods; I can get picture hangers and duct tape and sink stoppers at the same time I’m buying milk, eggs and toilet paper.   And if there is a Starbucks in the same store, that doesn’t hurt, either. “Work smarter, not harder,” that’s what I always say.

Ok, I don’t usually say that.  But if I were the woman I wish I was, I would always say that.

So it was unusual for me to find myself in front of Poolesville Hardware store last week.  I needed potting soil; I was already in Poolesville for other reasons; I didn’t want to spend $4.00 per gallon of gasoline to drive down to Lowes; and I was distracted by the pansies they had just put out front on that beautifully sunny spring day.  A Mommy’s version of ‘Oh! Shiney Object!’ 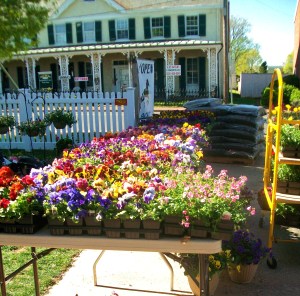 It smelled like a hardware store: metal, fertilizers, man-sweat.  There was no question that I was in a man’s domain.

But before I could recoil, I noticed the flower seeds on the right.  And the kitchen gadgets in the aisle in front of me.  And the toy rockets with colorful tails.  Without knowing it, I was pulled in farther, topsoil receding to the back of my mind as I nosed around….

What was in that corner?

Oh Cool!  I didn’t know I could buy that here!

Is that what I think it is?  I haven’t seen one of those in years!

Are those things still legal?

They still make those??

I was catapulted back to my childhood, holding my dad’s hand, asking him what this was for or what that was for and could I please have one of these?

There is rack of penny candy in the center of the room.

All it needed to make it fully Norman Rockwell was a potbelly Wood-burning stove, and a couple of grandpas smoking pipes, playing checkers in the corner with a dog curled up at their feet.

I asked the man behind the counter, who was busier than a tornado in a trailer park, how long Poolesville Hardware Store had been here.

Turns out the guy was the owner, John Speelman.  And he shared that as its present incarnation, the store had been around 25 years. Twenty Five stinkin’ years!  And I’d never stepped foot in the place before!  And I guess the place had been around as a hardware store under different ownership a long time before he took over.

We talked briefly about the sad demise of Selby’s grocery store, and he admitted due to the warm winter, he’d just experienced the worst 8 weeks in retail he’d ever seen.  But doggedly he persists, maintaining a promise to sell only U.S. Made products, and his philosophy of quality versus quantity.

He also shared with me that he is shifting the store to “Going Green”.   That has got to be difficult in a hardware store. I respect the fact that he would even try. Especially in this economy, when he is the witness to many other local stores closing their doors.

I felt three very poignant things:  1) Guilt for never having patronized that place and 2) Surety that I would be back to patronize it in the future, and 3) The urge to give a primal grunt.

But maybe that was just gastrointestinal distress.

Go visit them! Poolesville Hardware Store…even if you don’t need something, they have it there.