My Captain and I were restless last night.   We felt adventurous, but not to the point where we had to actually exert ourselves.  We decided to go to a restaurant we’ve never been to, that was not too far afield, and settled on one in Gaithersburg called Growler’s.

To get there we had to pass Dogfish Head Restaurant, and that is not easy to do.  Their chocolate martinis, their Cajun eggrolls….oh lord don’t get me started.

But we were on an adventure, dag-gum it!  We couldn’t stop!!

We had a hard time finding a parking place when we got to Growlers, which is located on a prominent corner of old town Gaithersburg.  A grand old structure, it had been built in the late 1800’s, right ON the street.  Not a lot of room for error on that one.  Though, admittedly, the street probably was smaller then.  It served as a post office, a community gathering hall, a store…all kinds of things.  It was the biggest structure around for miles.

Apparently, the old hall had burned back in the early part of last century, and had never come back to its original glory, until very recently.  Now it is a very, very cool old historic landmark.

Unfortunately, that was the best part of our dining experience.  (Insert Organ music: Dun Dun DUUUUNNNNNN!!!!)

We started out with cocktails.  Growler’s casks their own beer, and My Captain, being somewhat of a connoisseur, was eager to try something new. 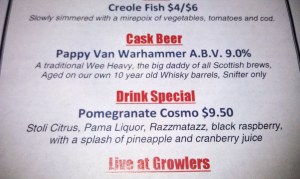 He chose a beer that had been aged in Whisky barrels: Pappy Van Warhammer. (It must be fun to come up with beer names. Often times the names sound like they were created when the brewer was already drunk…)   It came Dark.  He loves Dark.  It was straight from the cask, unrefrigerated, and packed a punch (much like his wife…). 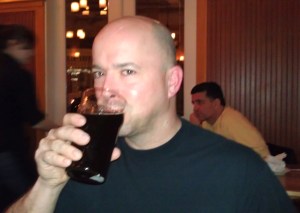 I chose the only non-beer chick drink on the drink menu:  The Pomegranate Cosmo.  It resembled nothing of a cosmo, but it was sounded yummy.  It looked purty when it came, and so very cute in its itsy bitsy, eensy weensie widdle martini cup.  My first impression, “You are charging me HOW much for this kiddie drink???” The Scottish in me hates to be taken like that.

But I still drank it.  And it was good, I’ll give them that.

I don’t care how yummy something is, though, zinging me with a big pricetag….and right out of the starting gate for the meal, tends to leave a bad taste in my mouth.

Pushing that aside, I decided to try their fried pickles.  For six bucks, I figured I’d get a basket of fried pickles, right?

There weren’t even a dozen on this little dental-tool-looking plate.  That’s, what?, more than 50cents a pickle slice?!!  (See how good at math I am?)  My Scottish was SCREAMING at this point.  I mean, 50Cents for a SLICE, not even the whole dag-gum pickle!!! Outrageous.

And they were good, but not 50cents a pickle slice good.  And the sauce that was served with it did not compliment the dill pickle flavor…too much salt all around.

At that point I was so peeved I ordered nothing else.  My Captain, however, had his beer and wanted something to go with it.  So he ordered the Shepherd’s Pie.  It came out hot.  Looked good.  Smelled good.  Was a decent portion…not generous, but fair enough: 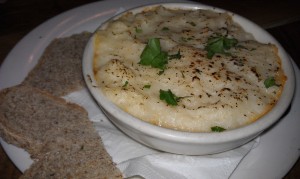 As you can see, it came with home-made bread on the side.  A little dry, but that is good for sopping up pie juice, right?

I thought maybe Growler’s could redeem itself with this dish.  But My Captain, a very LOW-Maintenance eater, admitted that the veggies inside were mushy.  WAY over cooked.  And frankly, they looked like they had come from a bag of frozen mixed veggies.  Not fresh and cut large like you might expect from a restaurant that claims it’s all ‘from scratch’.

I am the one in our family who complains the most.  You’d think I would be the one to call over the manager to give him some constructive criticism.  But honestly, I was so disenchanted with the experience that I really just wanted to go.

My Captain was not so easily mollified.  Ever the ‘fixer’, he felt we ought to give them some feedback, and so he talked with the manager about our experience.  The guy came to our table, shirt un-tucked, sucking on a cough drop, looking harassed already.  I felt for him.   We said what we had to say as gently as possible, to which he replied appropriately, and could not leave fast enough.

I feel so traumatized.

I need to go to Alexander’s today to cleanse my palate.   Maybe I’ll be able to sweet-talk My Captain into going there after we visit the ‘tax man’.