“Lest We Ever Forget” has already been forgotten in many places across the nation.

“Are you freaking kidding me?”  You ask, having been watching several news clips about September 11th.

Yup. Case and point: My Captain spoke all day at our local middle school to 7th graders who were not even born when the attacks occurred, who had no real knowledge of the why’s and how’s of it all going down, and who really, to be honest, in their lack of understanding, did not care about it.  Apparently the 60 second news bits they had seen didn’t quite bring it to life for them.

But after My Captain spoke to them, and showed them the timeline, and his experiences there with Urban Search and Rescue, they all got VERY sober.

The whole room was bathed in quiet contemplation of a world that was different before terrorism came to our soil.  They listened respectfully about how so many innocent people died during our nation’s introduction to the new reality of domestic terrorism. 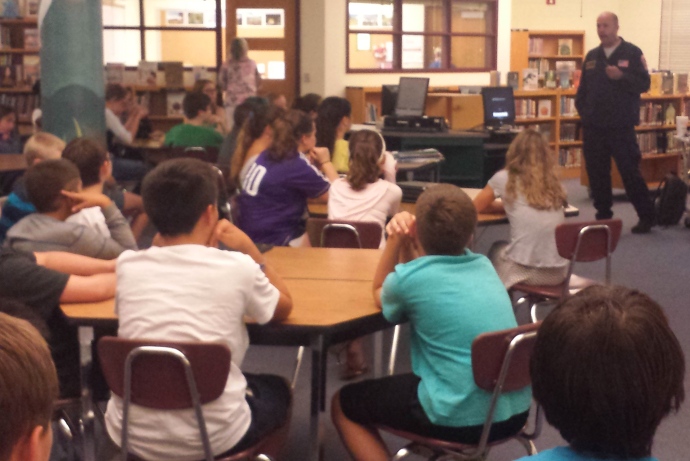 My Captain grows increasingly frustrated that “Lest We Ever Forget” is, in reality, being forgotten.  Being there is one thing, trying to bring children to that place with mere words and pictures is quite another.  You can tell them that the fire at the World Trade Center burned around 1500 degrees…and that we know this because it takes that much to bend steel…and you can try to explain why the people above the 77th floor or the 93th floor would rather jump than burn and suffocate….but it is just another story to them.  It could be another “Terminator” movie in its surreality.

How do you take those children back to that awful day?

On Facebook, I saw firefighters in other states lamenting that their children heard nothing but a passing paragraph in a history book of the tragic, life-changing, country-changing events of that hateful day.

I’d like to find someone we could work with to videotape next year’s school visit for My Captain, so that when he can no longer share these experiences with the kids in person, his video could.   A video of his story could also be something that could be shared county-wide or further, because I don’t think our whole national school system is talking about this to the generations who were not there!

But until then, he feels his efforts aren’t enough.  He knows he’s swimming against the tide of apathy and ignorance of that fateful day.  He still tries his best, though. 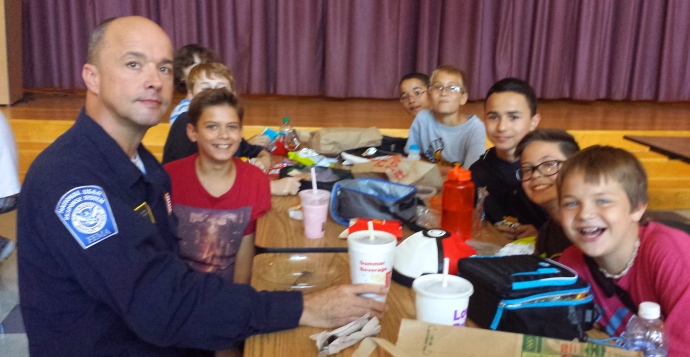 And in the end, all you can do is have lunch with the kids after your lecture,

…and allow them to have their childhood back.

But Beloved, please know that, inadequate as it may seem to you, every time you go to that school and do your best to impart the history of that horrible, horrible day, you ARE honoring those firemen, and policemen, and innocent people who were murdered.  You honor their memories and their sacrifice.  You DO.

YOU have never forgotten, and those souls will always know that.

And to you, Dear Reader, if you agree that we mustn’t let this slip into sound bites and relative oblivion…if this moves you at all, or speaks to you on some level, will you please help spread the awareness and share this post?  No pressure.

But not an uncomfortable amount.  Just enough to make you want to share.