We had landed with a dull thud in Great Falls, Montana, My Captain only slightly peeved at me for embarrassing him on the airplane by coaxing the flight attendant into publicly bestowing him with a gross of barf bags.  Our energy was surprisingly up, despite our lack of sleep.  We obtained the rental car and started down the road to Glacier National Park.

A beautiful, though uneventful ride, we were plodding along swimmingly, when I saw it.

My eyes bulged out!

My hair stood on end! 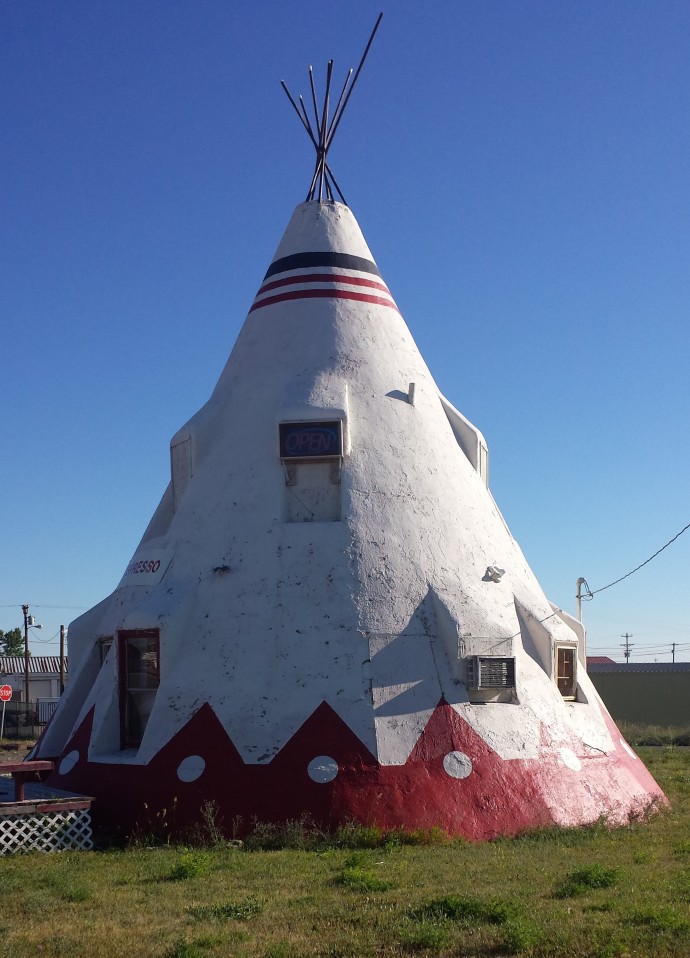 There, on Northbound 89, was a fifty feet tall, concrete Tipi.  I reached over and pulled the steering wheel out of My Captain’s hands, and we screeched to a stop in front of a sign that read, “Espresso Tipi.”

OH…….EMMMM…….GEEEEEE.  I needed to know what this was.  We looked it up in our handy dandy Montana Guide, and found it was exactly that, a fifty feet tall tipi, originally built in 1934.  And get this….it had been MOVED three times since it was built.  Three stinkin’ times!  If that isn’t a feat of awesomeness, I don’t know what is.

Sadly, it was closed, and by the looks of the tall grass surrounding it, closed for some time.

But I was not going to pass this by without a cheesy picture.  Varmint demurred, so she got stuck with the camera, and My Captain and Critter and I posed on the dilapidated deck of this curious cone.

I was so excited that I didn’t notice that poor Critter was smacked in the back of his head by my boob.  It happens.  It’s unfortunate, but it happens.  The boy needs to eat more so he’ll grow, for crying out loud.  I can’t make my boobs rise.  He’s just going to have to grow.

We finished the photo shoot, I looked across the street, and saw this: 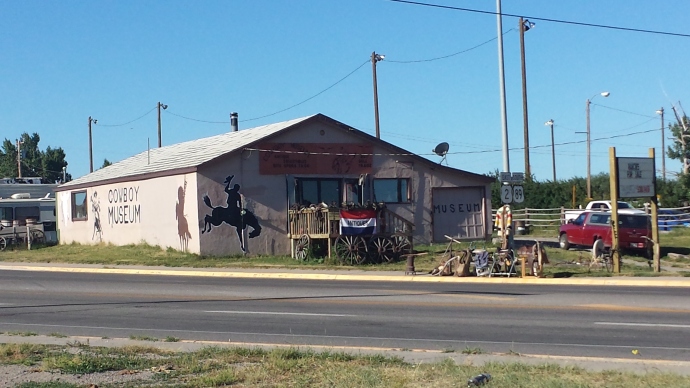 He wanted to get to Glacier before it got much later.  The man is very A to B, I swear.  I’m more of a ‘its all about the journey’ kind of gal.  But as he pushed and shoved and crammed me back into the car, he promised me a tour another time.

Gorgeous!!! And made entirely out of recycled metals!

I was almost as excited as I was with the Tipi, but only slightly less because of the wildlife on the dingdang thing.

We did another picture…this time snagging a stranger who had stopped to remove a beer from off the statue.  (Damn kids!)

And once again, poor Critter received a boob hat.

Look, I don’t plan these things.  There is just only so much you can do with the ding dang blobs of fat.  They are always getting in the way.

This one was pretty bad.  I nearly crushed my own boy.

So did we ever get to Glacier?  Did we end up in a fiery crash due to my steering wheel grabbing habits?  Stay tuned for More Mama in Montana 2014!