~ The Big-Ass Tire That Could ~

This is the story of a large tire who didn’t believe in itself, but with the help of the Montgomery County Special Ops (Collapse/Trench/Technical Rescue) Team,  learned to. 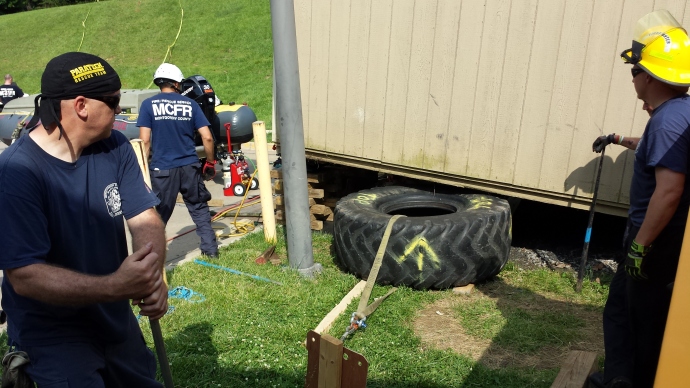 Fred was between 5 and 6 HUNDRED pounds of glorious black rubber.  He had lived a rather mundane life, going in circles again and again and again, until he was retired.  He thought his life was over at that point.  He had not been chosen to live the remainder of his years on a kiddie playground, and no one was making him into a redneck flower bed.  He was very sad.

Then one day, yesterday, to be exact, the rescue team from Montgomery County decided to use him for one of their hundreds of trainings.

Fred found himself being hauled up hills,

Just go with it.

The kind Special Ops team took him everywhere that day, so they could be more prepared when a true crises came.  And THAT made Fred feel good about his purpose in this world, for he knew he was a part of saving peoples’ lives….

…and tiring out grown mens’ behinds quite thoroughly.