My Captain worked at the firehouse Christmas Eve for 24 hours, and is at work again today, Christmas itself.

But this Christmas, he’s working by choice.  One of the Lieutenants wanted to be home with his family, and My Captain agreed to work for him since no one else would.  As Varmint and Critter are spending Christmas with their father, it seemed to be the right thing for My Captain and I to agree to. What better way to honor Christmas, than to give of ourselves?

Since he was to be solidly in place at the firehouse during Christmas Eve and Christmas day, I went to him!  For five hours on Christmas Eve, I sat next to my beloved’s desk as he worked on his computer, and waited patiently for him, as he ran numerous 911 calls.

It meant that I missed singing Silent Night at the candlelight service at church, something I truly love to do. But who wants to sing when your heart is alone?  I sing much better when I’m with my Captain.  He keeps me on key.   And, if you think about it, if God is Love, then being with My Captain is akin to being at church.  So the mountain went to Mohammad.

Yeah, I did.  I went there.  I just referred to myself as a mountain.  Let’s move on.

There was a house fire this morning in Sandy Spring.

It’s actually still being fought, as I write this.  So far, two firefighters have been burned, and a civilian as well.  But as of yet, no one has died.  On Christmas.  And do you know why?  Because the firefighters were at the ready.

And My Captain is at his fire house right now, still at the ready.  Even as little kids are rushing downstairs to tear open their gifts, and mom is burning the sticky buns in the oven, and dad is putting the batteries in all the toys backwards, he is ready.  All of the men and women are.  They are tired, but they ARE ready! 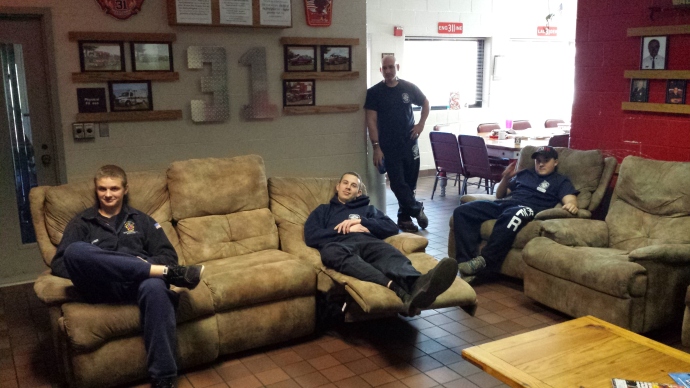 Some of them begrudgingly, as they couldn’t be with their own families.  Some happily, because the fire service might be the only family they have.  Some willingly because it feeds their own sense of purpose.  Whatever the reason though, they are there.

I’ll be honest with you, My Captain would rather be home, sleeping in with Sir Monty of Stinky Butt curled around him.  He’s a little bit tired today, as you can see by this selfie that I begged him to send…. 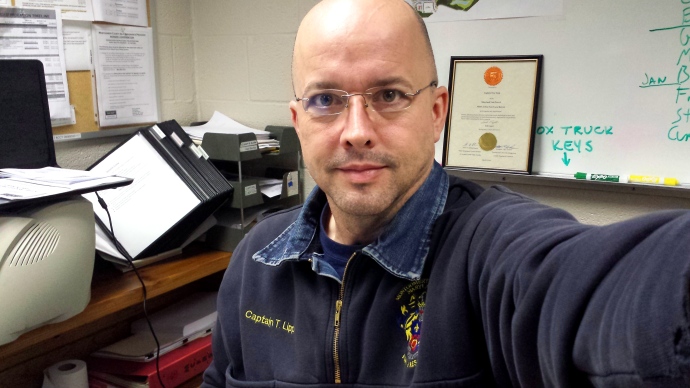 He hasn’t even changed into his proper uniform yet.  They are a little more casual about the dress code on Christmas!  I don’t begrudge them that one bit!  And personally I find him just as handsome, unshaven and in his job shirt, as I do clean cut in his Class B uniform.  I might be a little bit biased.  Just a smidge.

But he’s safe for now.  Alive and healthy as he waits for the tones to go off.  We are lucky in that.  Last night in Pennsylvania, another firefighter was not so lucky.  He died in a crash, on his way to a 911 call.  http://firecritic.com/2013/07/23/lodd-quentin-vfc-pa-firefighter-bruce-sensenig-killed-while-responding-to-crash/

The lesson in that is that we never know what is around the corner.  Who’s going to be killed.  Who’s going to save a life.  Some put themselves in harm’s way…soldiers, police, firefighters.  They willingly throw themselves between us and chance… so the rest of us can sit around the fire, drinking eggnog, and live comfortably in the subconscious knowledge that if something bad happens, help will arrive.

I know I don’t always consciously think about it, and it’s a lot closer to my life than some people’s.  But it doesn’t matter to My Captain, and men and women like him, if we think about it, or even if we are grateful for it.  Because regardless, they are willingly ready to jump to our aid.  Even if it means they will die in the process.

If that doesn’t honor the meaning of Christmas, I don’t know what does.