One of my recent ‘husband’s career’ posts entitled “The Cost of Search and Rescue” prompted a reader to ask me if I was ever afraid of other women luring my catch of a husband away from my side.

She asked me if I had considered that by exposing him, and in such a positive light, to the general populace on my blog the way I do, I might be making him a target for aggressive women on the prowl.

She asked me if I worried he might be tempted by the thrill of other women who want the hero in him for themselves.

And golly, thank you very much for putting that little nugget of hitherto unsought anxiety in my brain.

I was going to see My Captain today to take him lunch at the station.  He was working Over Time for another 24 hours after his normal 24 hour shift, and I had not packed enough food for both days.

And after having the exchange with the reader who wondered if I wasn’t setting myself up for ruining my marriage, I decided to put a little effort into my appearance before I left to go visit him.  You’ll note I didn’t say MORE effort.  I just said effort.  That was intentional.  Some people dress for success.  Some for good first impressions.  I dress for comfort.  Some women dress with the purpose of attracting men’s attention.  I dress with the purpose of avoiding chaffing.

But like I said, after that confidence-shattering exchange with the reader, I put effort into my appearance.    I brushed my hair, smelled my armpits, and put on clothes that weren’t made entirely of stretchy cotton knit and had the words “comfort waist” somewhere on the tags.

I think I looked pretty daggum nice, really.  I kind of felt pretty.

I arrived at the station to feed My Captain.  Distracted, as always, he gave me a peck on the cheek without really looking at me, and said he’d be right with me.

20 minutes later, he re-joined me at the kitchen table, long enough to snarf down the food, and wipe his mouth,  when the alarm tones sounded, and he ran off to a high-rise fire without so much as a look back.

This is how his life has been since I’ve known him.  It is one of the things I love about him…being so needed by the world.  I’ve never minded sharing…well, MOSTLY… so today’s visit should not have bothered me so much.

Except that I made an effort, you see, to be, er, attractive.  But since he doesn’t usually find me attractive that way, he wasn’t paying attention, you see.  And at first I was hurt.

But upon reflection, I remembered that he is not attracted to my fine eyes.  Or my above average height.  Or my once fine,  but now slightly saggy, boobies.

He fell in love with my intellect.  My wit.  My ability to care deeply for people.   My sensitivity.   My intuition.  These are the things that REALLY mattered to him.

I had not been giving him enough credit.  He’s not some 20-year-old whose groin makes his decisions.  He’s a seasoned and wizened 50-year-old, who knew he’d made a lucky catch in the chubby, but hilarious, and seriously loving, me.

Are there women around him with more visually appealing traits? ……uh, YEAH.  Like a kabillion gillion of them.

There are female firefighters he works with quite often who are drop dead gorgeous, physically strong, wickedly courageous, and would therefore be triple threats!

There are women on any given work day who see him in his uniform and give him the ‘Come Hither’ look.   That’s the curse of any man in uniform, I suspect. 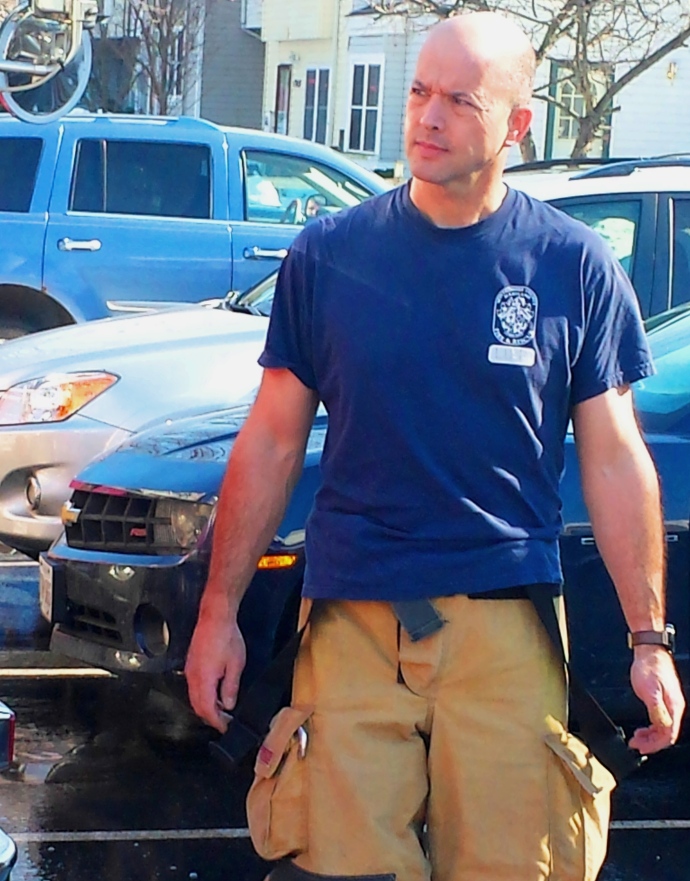 I can’t worry that any one of them would make a single difference to him.

And he knows it.