My Captain had a brutal day today…more than usual, because the Medic unit he was officer of during his 10 hour stint of overtime was slammed.  In other words, after his normal 24 hour shift as officer of the Engine (that’s fire truck, to you and me), he went straight into his overtime shift by responding to 911 calls non-stop. From the moment his feet hit the floor in the bunkroom, he was on the move until he could pause at 3pm to choke down three pieces of cold pizza. Then he was off and running more non-stop emergency calls until his relief came and saved him!  (Thank you Mr. Hrenko!)

Oh, believe me, most medics are delighted as all get out to hear a Captain suffer like that.  Many of them have this misconception that Captains’ lives are cushier than their own.  And there is no doubt about it, Medics have one of the most challenging, punishing jobs out there.  They’re tough, these men and women.  Emotionally and physically.  They have to be.

But the ones that snicker maliciously as My Captain stretches his tired muscles and rubs his tired eyes, they forget, you see.  They forget that he was once where they are.  He paid his dues.  He lived that horrendously punishing schedule.  But they don’t understand what his challenges are now.  Different, but still very challenging and tiring, and stressful.  All those things.  He has walked in their shoes, but they have not yet walked in his.  It’s important to remember that.

So when my beat-up beloved came home, it was all he could do to greet our munchkins before he promptly flopped into the recliner.  He didn’t even take a minute to change out of his uniform. (ew.)

I felt so bad for him.  He works so hard to provide for all of us.  I wanted to somehow soothe him. 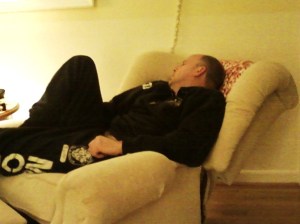 So, I pulled out all the stops for dinner.  I didn’t just make a home-made meal….I made the ultimate comfort food and made it TURBO-home-made.

I made Chicken and noodles…and the turbo part?  I made the Noodles from scratch, baby!  Nothing says love like homemade noodles!

Here’s what I did:

First, the holy trinity:  I chopped up and sautéed carrots, celery, and onion until they sweated and began to get translucent.

Then I added minced garlic, chicken base (like bouillon, only creamy), poultry seasoning, parsley, water, and finely chopped roasted chicken.  I let it get happy for a good 30 minutes.  And in that time, the magic happened!

I cracked four eggs into in my Kitchenaid mixer, and with the bread dough hook, incorporated in 2 cups of flour.  It made the most beautiful egg noodle dough you’ve ever seen.  Then I rolled it thinly. 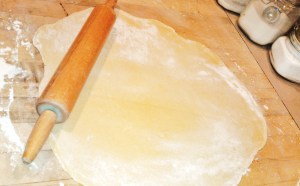 And I took my super-high-tech noodle cutter…

…which, by the way slices absolutely evenly,…

…unless I try to take a picture of it while I’m cutting.  Then, …not so much straight…. 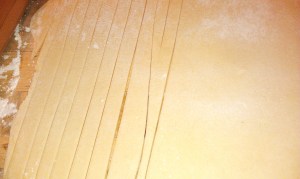 And when they were cut one way, I went back and did the other perpendicular slice in the size of noodles I wanted in my chicken and noodles. 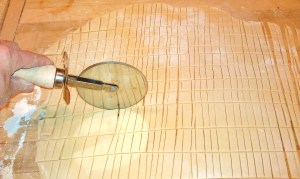 Then I poured those babies in the simmering chicken and veggies… 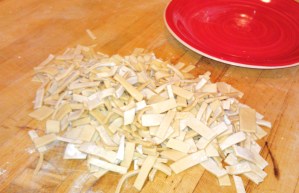 And happiness was born. 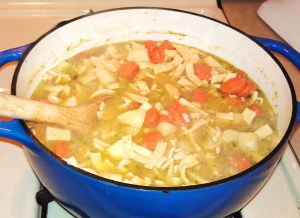 One thought on “~ Babying My Captain ~”