We have a little ice cream shop in the tiny hamlet of Beallsville, Maryland.  It sits caddy-corner to our firehouse, at the cross roads of Beallsville Road and Rt. 28.

The building itself has seen many incarnations.  It used to be a restaurant named “Staub’s,” known for it’s amazing hush puppies.  It’s been many other things too.  But right now it is used by a local family, The Harney Family, Gary, Paul, and Gibbie, for a variety of purposes, the greatest and most noble of which is Ice Cream.

They also have a locksmith, security business, gift shop, and other things.

But did I mention the Ice Cream? 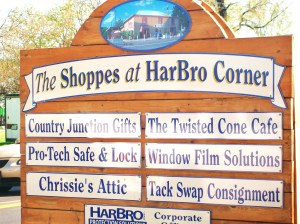 I can walk away from most things, but I can’t seem to drive past The Twisted Cone.  And if I did, the Varmint and Critter in the back seat would make their objections known most audibly… And possibly painfully. 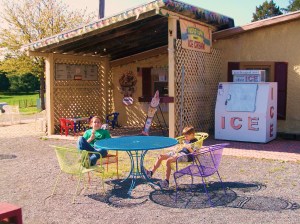 My first mistake was starting a tradition during the last school year where every Friday I would drive my Brats up for Ice Cream after school.

It wasn’t long before we were doing frequent mid-week stops.

And then of course we had to make stops after sporting events: Track, Softball, Thumb Wars, Rock Paper Scissor Games, those kinds of things. 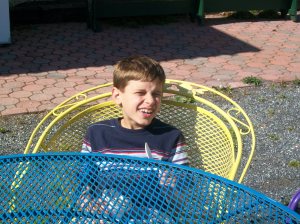 At some point someone dared us to try every flavor.  I think it was one of the owners.

We don’t back down from dares.

All I know is that it’s one of our “Happy Places”.  A place my kids will remember when they are older.

You know, when I’m dead, after my arteries have fully occluded.

But I will have died happy, that’s for darn sure!