~ Mother Of The Freakin’ Year ~

Critter’s Elementary School’s Spelling Bee final round was tonight.   Last year he won second prize (and his sister, Varmint, got third) for the whole school. 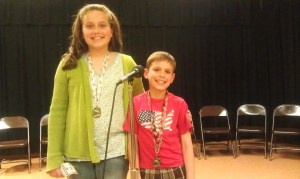 It pissed Varmint off to no end that Critter beat her, because she had taken the time to study the word list, and he had not.

There is no justice in this world, Varmint.  Better to learn that now, I reckon.

This year, Varmint is in middle school, and Critter was on his own at the Spelling Bee.

And he didn’t study the spelling list again.  At least not until a couple of days ago when I guilted him into it.  I threatened him that if he wanted to be spelling champion, he had to work for it!

“Mom, I don’t care if I get second or third place again.”

“WHAT?!”  I was appalled and alarmed!  “Who goes into a race hoping for anything other than first place?  Who goes through life hoping to NOT be champion?  All Second place is, is the first place loser, after all! Don’t you forget it, son!  Geeze, Critter!  Get some motivation already!”

I should have been a drill sergeant, I tell you.

So he relented, and read through the list….like maybe once.  And I’m not even sure he didn’t skip a bunch of words.

All right then.  So be it.  He’s going to have to learn the hard way, I guess.  You can lead a horse to water, but you can’t make him want to learn the dingdang spelling words, now can you?

Tonight arrived.  The Spelling Bee began.  I sweated my body weight 3X over.

I’ll cut to the chase.  After what seemed like an eternity, Critter was in the winner’s circle again this year…and what did he get?

Only this time he had the words of his Mama rattling around in his head, “Second place is only the first place for losers!” to help him deal with the disappointment.

Way to go, Mom.  Way to screw up your kid, right out of the batting cage.  Mother of the Freakin’ Year, right here, folks.

I went to him after it was over, ready to soak up the tears and tell him I didn’t mean it, and that “Yey Him!” was really what I meant.

But he wasn’t crying…he was actually excited.

“MOM!  Did you hear what the prize was this year?  It wasn’t a Nook like last year, it was $100 gift certificate!  100 Smackaroos!  I am SOOOOO going to win first place next year!”

He just wants the cash.

One thought on “~ Mother Of The Freakin’ Year ~”